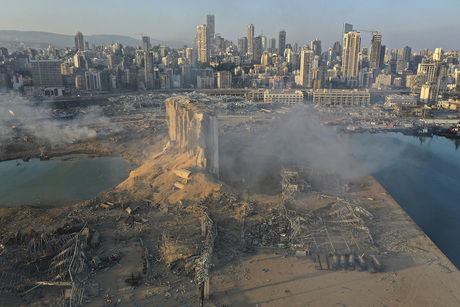 The Premiership on Wednesday issued an administrative memorandum declaring national mourning on the anniversary of the Beirut Port blast, which will be marked on August 4.

The PM Press Office's memo stated that “public administrations, public institutions and municipalities will be closed on Wednesday, August 4, 2021, in commemoration of the tragic anniversary of the Beirut Port blast."

It added that "flags will be flown at half-mast over administrations, public institutions and municipalities."

The memo also said that "regular programs on radio and television stations shall be modified to commemorate the painful tragedy in solidarity with the families of the martyrs and the wounded”.

for the occasion all the names of the MPs who did endorse the motion to have the blast indicted officials tried at the Supreme Council instead of a judicial court must be made public on news channels, media oultets, social media and any other means. They need to be ostracized completely from the society, Lebanese people must confront them directly on every possible occasion, public or private, official events or everyday life, covering them with shame and disgrace, rebuking also their family members and relations.