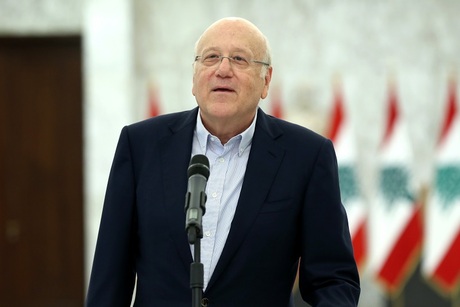 “I submitted to President Aoun my suggestions regarding the cabinet line-up and I sensed acceptance from his side,” Miqati said after the meeting.

“I took his remarks into consideration and I hope we will see a government soon,” the PM-designate added.

Miqati had also met with Aoun on Tuesday to brief him on the outcome of his nonbinding consultations with the parliamentary blocs regarding the new government.

He had pledged earlier on Tuesday to hold continuous meetings with the president in order to speed up the formation of the new government.

24 crooks … I cross my fingers the international community won’t assit these thieves that are directly responsible for all of our problems.

Hariri said that before you after a few days from his nomination, and ended up resigning after eight months. You appear not to know Aoun and his SIL behind him. I am sure you would tender your resignation after a month owing to impediments you will face from Aoun and Basil. The only way forward is seeing Aoun's tenure finish without forming a government, and then, the FPM of Basil will finish completely. Then, we could rebuild Lebanon on a new basis. The only thing that Hariri was smart at is putting you facing Aoun and Basil to burn you alive. Couldn't you fathom this simple truth?