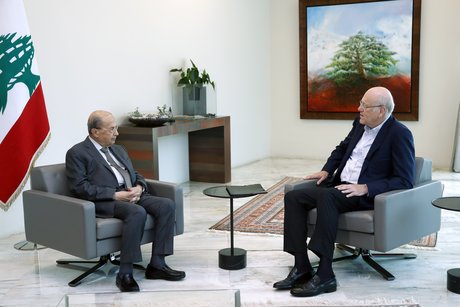 The meeting aims to continue the discussions over the line-up of the new government.

TV networks said that Miqati will not make a statement after the meeting.

After talks with Aoun on Wednesday, Miqati announced that he submitted to the President his suggestions regarding the cabinet line-up and that he “sensed acceptance from his side.”

“I took his remarks into consideration and I hope we will see a government soon,” the PM-designate added.

Miqati had also met with Aoun on Tuesday to brief him on the outcome of his nonbinding consultations with the parliamentary blocs regarding the new government.

He has pledged to hold continuous meetings with the President in order to speed up the formation of the new government.

Miqati is hezbollah's nominee for PM. This is going to be Aoun-Hezbollah government just like Miqati's first government.

It will be a bridge to float the ruling mafia until the next elections in the hope they will renew their legitimacy.

Yup and the international community is not stupid. This means no rescue and a very dark period for Lebanon. Get out while you still can. Welcome to Hizbullahstan.

Started packing my rugs, awaiting a mule or camel since there’s no fuel for the car.

Wonder how long the military and security forces will remain loyal and following orders? They might rebel and split because they and their families are starving and suffering as well. The return of a sectarian dark period indeed. An armed revolution and brief civil war followed by a western coalition international intervention might be the only solution. History always repeats itself.