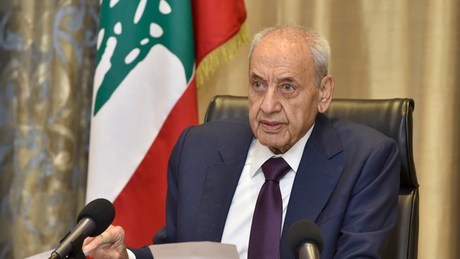 Parliament Speaker Nabih Berri on Tuesday called for identifying the side that imported the ammonium nitrate shipment that caused the catastrophic 2020 port explosion as well as the causes of the devastating blast.

“Justice is neither a petition nor a bravado, but rather a daily challenge that can be achieved through the independence of the judiciary, the implementation of the constitution and the law, and rising with the martyrs’ cause and blood above any repugnant political, electoral or sectarian consideration,” Berri said in a statement marking the first anniversary of the tragic explosion.

“From our political and legislative position we again say that we will accept nothing less than justice and the penalization of the culprits, whichever position they occupy and to whichever side they may belong, and the gateway to that would be the identification of the side that brought the nitrates of death into our capital Beirut as well as the causes of the blast,” the Speaker added.

Berri also strongly reiterated that “there will be no immunity, protection or cover except for the martyrs, the law and the constitution.”

The lead investigative judge probing the case, Tarek al-Bitar, has asked parliament to lift the parliamentary immunity of two former ministers who belong to Berri’s Amal Movement so that they can be questioned. Bitar is also seeking to prosecute the caretaker premier as well as two other former ministers and former security officials and judges.

LMAO. As if he doesn't have a hand in it.

"Berri Urges Unveiling Side that Brought Nitrates"
Stop wasting people's time, pro Assad businessmen the Syrian George Haswani and Russian-Syrian citizens brothers Mudalal and Imad Khuri brought it via a dummy corporation, that's been establish. Most of it was then smuggled to Syria by the usual suspect to fuel Bashar's barrel bombs. As the Hezbollah guy said "smuggling is part of the resistance".

What else can he say, knowing that talk is so cheap in Lebanon anyway..

Baydoun!
Hezbollah got the ammonium nitrates to help Assad and Israel bombed it, and u know it.

Keep beating around the bush...

For God's sake, don't we have someone who is smart to handle this guy's position. This guy is murderous, stupid, and above all, corrupt. Just look at his wealth and one could see how this poor guy has become billionaire overnight. But, this only happens in Lebanon. But, above all, the Lebanese are to blame for they are really the biggest deranged people who still support lunatics like Beri.

Sir Mr Berri, is it who brought it? what about who let it in? what about who did not do inspections and most likely for few dollars in thier pockets? Fire these people Sir