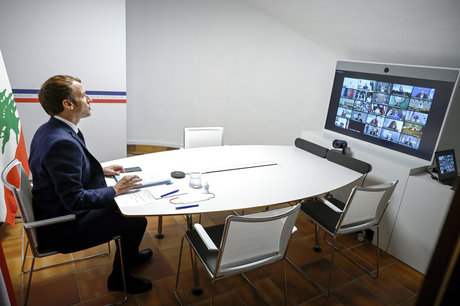 The French presidency said an international conference on Lebanon has gathered over $357 million in aid required to meet the country's humanitarian needs, one year after the massive explosion at Beirut's port.

U.S. President Joe Biden, who addressed the conference in a video message, pledged to give $100 million in new humanitarian assistance.

Lebanon's current humanitarian needs have been estimated by the U.N. to be at least $357 million. Aid will focus on food, schools, the health sector and clean water supply, Macron's office said.

Wednesday's event was also meant to mount pressure on Lebanese leaders to form a new government able to implement reforms and start rebuilding the country.

Lebanon is going through the worst economic and financial crisis of its modern history, and a political stalemate that has kept the country without a functioning government for a full year.

Biden said that "no amount of outside assistance will ever be enough, if Lebanon's own leaders do not commit to do the hard but necessary work of reforming the economy and combating corruption. That's essential, and has to start now."

Lebanese politicians have only made the situation "worse by placing their individual and political interests above the Lebanese people's interests," Macron criticized. "Lebanon definitely deserves better."

Macron said that humanitarian aid promised Wednesday will be unconditional.

However, he warned that "there will be no blank check to the Lebanese political system because it is defaulting. ... Lebanese leaders seem to opt for the deterioration (of the situation). I regret it. I think it's an historical and moral error."

Michel, the European Council President, stressed that the EU adopted a few days ago a "sanctions framework ... to target those in Lebanon who obstruct efforts to end the political crisis. We obviously hope that we will not be obliged to activate it."

Macron, who went to Beirut twice since the explosion at the port, has led international efforts to try to help the former French protectorate by providing emergency aid. Last year's conference on Lebanon, organized in the wake of the explosion, raised about 280 million euros ($332 million).

According to the U.N., over half of Lebanese people now live in poverty, one in three Lebanese suffer from food insecurity and nearly 4 million people are at risk of not accessing safe water.

Thanks God for this great Initiative by France and UN as well as so many head's of State giving their support for the people of Lebanon. Lebanon's political Elite will ho down in History, as they are ready to sacrifice the people's wellbeing, just so they have their power and control. It's all for them and not for sake of the country. Everyone knows this by now.

they gonna steal it all

Ya Macron ya habibi khalass massareh!!! We want sanctions!!! We want you to seize the assets of these PoS and put them in a fund to rebuild Lebanon, which will be released when we the Lebanese people get rid of these PoS in the next elections!! We want you to call out Iran and pressure it to stop its terrorist operations through its armed militia in Lebanon!! We want you to order an international investigation that will expose officially what we all know: that Syria and Kizb are behind the Ammonium!! This is what we want!!

The funny part of this donation meeting is our president, who sat alone in his room tracking the meeting as if he has any brain to follow it up. The problem of Lebanon is not in receiving donations; the main proiblem is Huzbullah and their accessories, Aoun and Basil, who handed over the rein to this devilish party to destroy Lebanon as we know it. The irony is that Aoun and Basil label this under the theme of Christian protection, and most importantly, the contribution of Al Rahi in destroying what's left of the Christian presence in Lebanon. No matter how much money was collected, Lebanon remains in the eye of the hurricane, which could only be stopped through the removal of Huzbullah. Any other avenue is bound to fail miserably.

As long as all the money offered is sent to Lebanon as material for reconstruction and not as actual money this will be OK. However if even a small part of it arrives in the country as cash, most of it will never reach the intended destination, and simply go to the bank accounts of politicians from all parties.