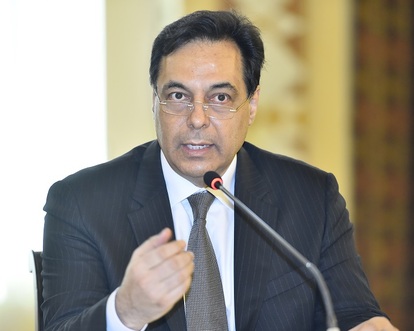 He said in a statement that the Israeli enemy has waged an explicit aggression against the Lebanese sovereignty “with artillery first then with warplanes.”

He added that “Israel has publicly admitted this flagrant violation,” adding that “no party has claimed responsibility” for the rockets fired from Lebanon and that the intentions and timing of rocket fire are “suspicious.”

Diab stressed that this “dangerous aggression is a major threat to peace at Lebanon's southern border” and that “Israel has previously committed a series of violations against Lebanon” and “has used the Lebanese airspace to attack Syria."

He called on the United Nations and the Security Council to “deter Israel from repeating violations against Lebanon,” and from “threatening the stability that has existed since 2006."

Rockets were fired from Lebanon into Israel. Israel retaliates in kind.... Aoun and Diab are outraged and want to file a complaint with the Security Council.

Wrong. Israel started it. Israel bombs Hezbollah and Syria every few days in Syria. This is simply a retaliation by them.

have you filed any complaints against the real threat to lebanon's security aka lebanese warlords?

Never has Lebanon known or seen a shia appointed Prime Minister who loves teaching as much as this one, ever!

Dont forget to mention who fired first, Mr Diab, or else no one is gonna take you seriously...

Our politicians don't know how to please the Iranians...

“no party has claimed responsibility” for the rockets fired from Lebanon.
Nol party needs to, it is the responsibility of the Government of Lebanon to prevent these agressive terrorist acts.

hey Israeli stooge, you still write Ignorant and distorted comments with no shame,

Writing ignorant and distorted comments is your speciality and I certainly wouldn't want to challenge you on that. If it were an Olympic sport, you would win by a mile.

The UN is not ready yet to hear you claims