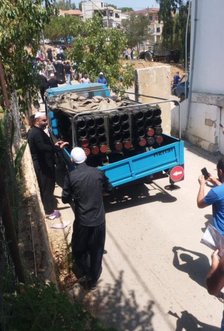 Hizbullah said in a statement Friday that a number of citizens intercepted Hizbullah fighters in Shwaya at 11:15 a.m. after they had targeted Shebaa Farms with rockets, in a response to Israel’s previous attacks.

Hizbullah responded that they had targeted open areas “in order to preserve the security of citizens.”

The statement stressed that “Hizbullah has been and will remain keen on protecting its people and not to expose them to any harm during its resistance work.”

A force from the Lebanese army and army intelligence agents later arrived in Hasbaya, and confiscated the truck carrying the rocket launcher.

The truck was carrying 32 rockets, 21 of which were fired into the occupied Shebaa Farms and the Golan Heights, media reports said.

I’m so proud of these men. May it be the 1st step in a revolution that will kick Iran out of Lebanon.

And you, what did you do with the other half of your life after spending the first half reading and commenting on his comments. With a name like norma-jaen one need not be a genius to figure it out.

These cowards are using non shi3a towns to launch their rockets drawing any Israeli retaliation away from their own community. If they want to perform their Iranian master's orders use their own Iran controlled towns.

They have to. They have to keep their own towns out of danger because no one will rebuild their towns for them this time if this becomes a repeat on 2006.

This might be a game changer for Lebanon. Good work, brave people of Shwaya!

It's important for Hezbollah to fire rockets from civilian areas so that when Israel fires at the rocket launcher and civilians are killed Lebanon can claim that Israel is committing war crimes.

Its a wasteland between Swaya and Chebaa, but they have to drive through Swaya to get there. Its normal for Hezbollah to fire from the vincinity of druse, christian or sunni villages. It makes it harder for the Israelis to retaliate, and IF the Israelis retaliate, then Hezbollah will claim: "See, Israel wants to kill ALL Lebanese!"

Hezballah only admitted they fired the rockets after their members were caught. They'd been denying they had anything do with the rockets and blamed unnamed Palestinian groups. This is how "honest" this so called Resistance is.