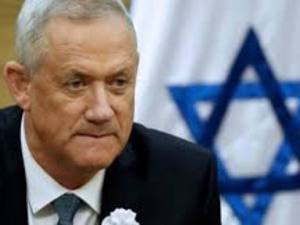 Israeli Defense Minister Benny Gantz on Friday warned Hizbullah and Lebanon not to “test” Israel, after Hizbullah claimed responsibility for firing rockets at the occupied Shebaa Farms in response to Thursday’s Israeli airstrike in south Lebanon.

In a phone call with his U.S. counterpart Lloyd Austin, Gantz called on Washington to intervene to seek a halt to the rocket fire from the Lebanese side.

“Israeli will not allow Hizbullah to mess with it and it knows that,” Gantz added, noting that Israel “has no interest in Lebanon” and will “respond to pacification with pacification.”

“We advise Hizbullah and Lebanon’s army and government not to test us,” the Israeli minister went on to say, warning that “the situation in Lebanon is horrible” and Israel “can make it worse.”

And stressing Israel’s readiness for “any scenario,” Gantz said Israel “will continue to work against Hizbullah and its proxies to protect the Israelis.”

How convenient and timely these rockets are to divert Peoples attention from the port explosions...

Great comment..... it shows you are an advocate of human rights and civil liberties.

All Palestinians wish to move to Lebanon to enjoy the good life the host Lebanon is giving to them. Why suffer under Israeli occupation, they would rather live in Lebanon, work, study, free democracy, free right to express, full citizen's rights what a paradise is Lebanon. Shame on you Israel.