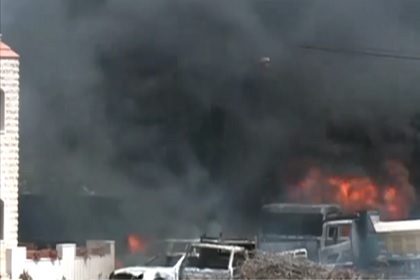 Angry residents on Sunday torched the villa of George al-Rashid, the owner of the site of the deadly blast in Akkar’s Tleil, while his son was arrested by the army.

Army troops had initially prevented the protesters from storming the building. The demonstrators returned later in larger numbers and managed to overwhelm the soldiers. The protesters also torched trucks and cars that were parked outside the villa.

In a statement, the army confirmed the arrest of Rashid’s son after unconfirmed media reports accused him of causing the blast through firing gunshots or throwing a lighter.

In remarks to MTV, Tleil mayor Joseph Mansour said Rashid, the owner of the cement and construction material site where the fuel blast happened, was not present in the town at the time of the blast.

He added that “the fuel container in the warehouse belonged to a man from Wadi Khaled who has been detained for four months.”

“The warehouse contained 18,000 liters of gasoline and reports that the warehouse was being used for smuggling to Syria are baseless,” Mansour went on to say.

MP Asaad Dergham of the Strong Lebanon bloc meanwhile condemned “political exploitation,” noting that “the owner of the warehouse does not belong to the Free Patriotic Movement but rather to another political movement.”

“We have nothing to do with him or with any of his family members … His political affiliation and commercial ties with some MPs from another bloc are well-known,” Dergham added.