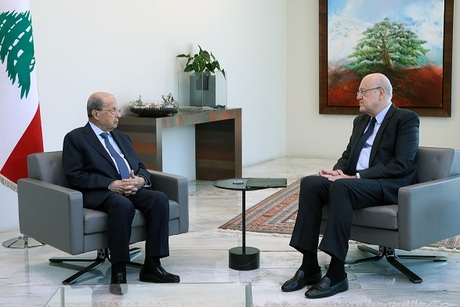 Prime Minister-designate Najib Miqati announced Monday that the cabinet formation negotiations have entered the phase of picking candidates, signaling that an agreement has been reached on the distribution of ministerial portfolios.

“We are trying to resolve the issue in a manner that is convenient for everyone,” Miqati said after meeting President Michel Aoun in Baabda.

Adding that there will be further meetings this week, the PM-designate confirmed that the discussions have entered the names phase.

Responding to a reporter’s question, Miqati said: “The chances of forming a government are higher than those of stepping down. There is no specific deadline but the time frame is not open-ended.”

Names phase?? What phase was it before?? Dancing phase, kissing phase, ?? No sense of urgency whatsoever!!!
What's after the names phase? Arguing phase? Selection phase? Refusal phase? Miqati resignation phase? Aoun asking for another designate PM phase?
Only phase I'm sure of is the destruction of Lebanon phase.

Convenient to every one would be the same shit we had before. Nothing gonna be done for the people. useless as always…

Politicians are not to blame , lebanese people are. They elected them and many still support them... Lebanese are just reaping what they sowed....

The word MANY is an understatement

Thank you for the heads up regarding the 'False' news.... Please, keep your contributions coming.

Where exactly in the Constitution of the Republic of Lebanon does is state that apart from the Prime Minister-designate having to "consult" with the President on the formation of a government, the President can name his own prospective Ministers whether the PM-designate likes them or not?

No where! Aoun is a dictator and interprets the constitution the way he likes.