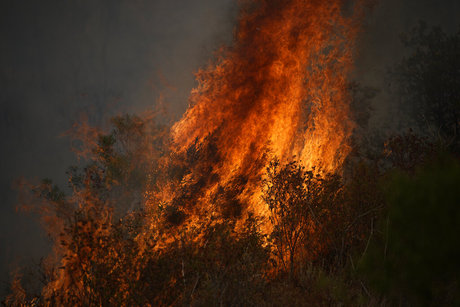 Hundreds of French firefighters battled a raging blaze near the Mediterranean resort of Saint-Tropez on Tuesday, with thousands of residents and holidaymakers forced to evacuate.

Roughly 750 firefighters using high-pressure hoses and water-dropping aircraft were attempting to control the flames, which began racing through a nature reserve on Monday evening.

"Thousands of people have been evacuated as a precautionary measure, but there are no victims," fire service spokeswoman Delphine Vienco told AFP on Tuesday morning, adding that the blaze was "still very fierce".

Among those moved to safety were 1,300 people staying at a campsite in the village of Bormes-les-Mimosas down the coast from glitzy Saint-Tropez.

As tourists and locals fled, officials warned them to avoid blocking roads used by the emergency services.

President Emmanuel Macron and his wife Brigitte are on holiday nearby, and he announced he would visit the area later.

Southern France is the latest area around the Mediterranean basin to be hit by wildfires this summer, a seasonal phenomenon that climate scientists warn will become increasingly common because of man-made global warming.

The blaze is believed to have started near a motorway that runs through the Plaine des Maures nature reserve some 30 kilometers (18 miles) northwest of Saint-Tropez.

Many trees were burnt around their trunks but their branches were intact, suggesting the fire had ripped through at speed.

"We've never seen it spread with such speed, it was three or four times the usual," Thomas Dombry, mayor of La-Garde-Freinet village, told AFP.

The fire came close to La-Garde-Freinet during the night but spared the settlement, which was badly hit in 2003 by a catastrophic blaze that cost the lives of three firefighters.

The local fire department said more than 3,500 hectares of forest and scrubland had burnt by Tuesday morning.

Interior Minister Gerald Darmanin is due to travel to the area later on Tuesday.

Hot and dry southeast France, which regularly experiences summer wildfires, had been relatively spared so far this year.

According to the Prometheus database on forest fires in the Mediterranean region, the total area burnt in France in the four regions hit was 2,336 hectares for 2021, against 7,698 for the whole of 2020.

At least 2,700 people, including many tourists, had to be evacuated, some by sea.