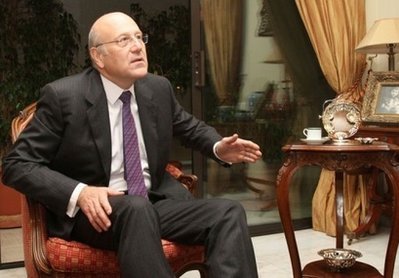 The government formation process suffered a setback in recent days due to President Michel Aoun’s keenness on having “a blocking one-third” and catering to the “ambitions of Free Patriotic Movement chief MP Jebran Bassil,” informed sources have said.

“Hizbullah Secretary-General Sayyed Hassan Nasrallah’s declaration that the arrival of Iranian oil was imminent increased the government formation complications… because the U.S. Caesar Act would be ready to besiege Lebanon, which does not tempt anyone to form a government in such a situation,” the sources told the Kuwaiti al-Anbaa newspaper in remarks published Friday.

The sources added that “Miqati was inclined to declare his resignation prior to his 12th meeting with President (Michel) Aoun yesterday, but some sides convinced him to postpone that until after today’s parliament session.”

“Miqati was preparing to visit President Aoun on Wednesday to finalize the cabinet line-up, but amendments carried to him by Presidential Palace Director General Antoine Choucair suggested that President Aoun and his presidential team were seeking to obtain 10 ministers, not seven as they should, which prompted Miqati to realize that this camp is still seeking to get a blocking one-third,” the sources went on to say.

Anyways, no government is better than a Hizbala/FPM government.

They told me in US law school that the President is the "sole organ of foreign policy". I would suggest that Biden could ignore this Caesar Act whatever it is as contrary to human welfare and global peace when used to block the Iranian fuel delivery. The random way the Congress (and President, and mass news media, for that matter) choose friends and enemies overseas is the antithesis of law. So the President gets the tie-breaking vote, I figure.

They told you wrong. Go back and study the constitution and laws of the US to understand that while the president has much leeway on many issues foreign or domestic, he is still constrained by Congress' approval.

Mikati, just go back where you came from and leave this country alone. If you going to give the same mafias the ministers they want, you will have a lot of blood on your hands. This country is much better off without you and your "diplomacies". Please respect the suffering of the people.

No more criminals in any new government!

why does he want to stay? they gave him a powerless job, he is a pm that cannot elect his own government, unless oun controls the army and the government and everything and continue with his corruptions and tantroms, go to hell oun