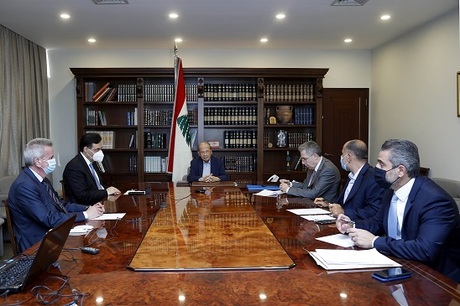 Lebanese officials have agreed to a short-term compromise to maintain fuel subsidies, in a move set to trigger more price hikes.

Earlier this month, the central bank said it could no longer support fuel imports at a preferential exchange rate, in what many saw as a de facto end to subsidies.

At a time when state electricity supply is almost non-existent, diesel has also been in short supply to run back-up generators to power homes, businesses and even hospitals.

On Saturday evening, the presidency announced approval of a "request for the Bank of Lebanon to open a temporary account to cover urgent and exceptional subsidies for fuel."

A kitty of up to $225 million would be set aside to subsidize imports of gasoline, diesel and cooking gas until the end of September, it said.

The decision was taken at a Baabda meeting attended by the president, the central bank chief and the caretaker prime minister, as well as the outgoing ministers of finance and energy.

Lebanon's currency, the Lebanese pound, remains officially pegged at 1,507 to the dollar, but it has lost more than 90 percent of its value on the black market.

The central bank previously provided fuel importers with dollars at an intermediate exchange rate of 3,900 pounds to the greenback, and fuel prices were fixed by the energy ministry based on this rate.

The Bank of Lebanon would now ensure the ministry could set prices based on an exchange rate of 8,000 pounds to the dollar, the presidency and the prime minister's office said, signaling a new increase in the price of gasoline and diesel.

Lebanese officials have blamed the fuel crisis on hoarding by distributors seeking to sell at higher prices, as well as smuggling to war-torn Syria.

Lebanese economist Nassib Ghobril said the agreement was a "compromise" that sought to allow fuel importers to release more stock and reduce shortages.

"But it will not solve the problem," the chief economist at the Byblos Bank Group said.

"The solution is to lift subsidies completely. That would lead to the disappearance of these long lines at the gas stations, and discourage smuggling," he said.

In recent days, the army has forced filling stations hoarding petrol to sell it, and security forces have cracked down on smuggling.

Saturday's decision comes a week after a fuel tank blast killed more than 30 people clamoring for petrol in northern Lebanon.

Lebanon is mired in what the World Bank has described as one of the world's worst economic crises since the 1850s, and more than three-quarters of the population now live in poverty.

The prime minister's office said it was also decided Saturday "to pay a month's salary in two instalments to all public sector workers," but gave no timeline for disbursement.

The government stepped down a year ago after a massive blast in Beirut port that killed more than 214 people, but has stayed on in a caretaker capacity amid deadlock over a replacement line-up.

A band-aid on a 20 cm deep flesh wound.
Worthless and useless politicians. Tfeh!

Only a bullet in their heads will make them understand that they need to go... Pressure, insults, sanctions, nothing works with these PoSs... They are slaves to their masters in Teheran and Riyadh

Kicks the can down the road.... expect more of same come the end of September..except worse.... pack up and leave if you can.