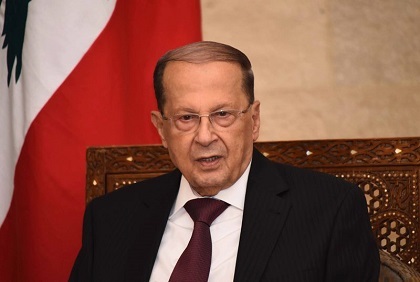 Prime Minister-designate Najib Miqati is meanwhile “showing utmost flexibility and positiveness to pull the formation process out of its crisis,” the source told Asharq al-Awsat newspaper in remarks published Sunday.

“The disagreement is not over the distribution of ministerial portfolios to sects and the naming of ministers, but rather over the fact that Aoun is fabricating one problem after another to guarantee the continuity of his political heritage through his heir -- Free Patriotic Movement chief MP Jebran Bassil,” the source charged.

The source added that the President is seeking “to secure 10 ministerial seats for Bassil and even 11, which is facing opposition from Miqati, who refuses to give the blocking one-third to any camp even in a veiled way.”

“The current weekend did not carry anything new, except for the continued exchange of drafts between the advisers” of Aoun and Miqati, the source went on to say, noting that Miqati might step down unless the coming week witnesses “tangible steps” by Aoun.

What a disgrace.
The people are suffering... dying... but his Highness wants a minority blockade...

Aoun will be remembered in the history of Lebanon, for his constant refusal to sign the proposed lineup for the new government, again and again, just do he can secure his power and control for him and Gebran.

I don’t understand why people haven’t yet torched Baabda with the enemy of the State in it.

i.report, the leabnese people deserve what they are getting, they still support the leaders and follow them blindly, they believe everything they are told and will follow them to the death.Until the sheep wake up and think like a united Lebanon and not divided by religion or politics, Lebanon will remain in the stone ages, I mean Lebanon is now worse than Somalia.. need we say more???

Excellent and powerful request....it shows your human side and compassion for our president. Please, keep your contributions coming.

You are stating the obvious and we all agree with your assessment. Well done!

Do not feed this troll!!

Finally, someone who is starting to get it... I mean we don't need to burn the palace to the ground, that is Lebanese property, but we need to put it under siege and peacefully reach a way to oust the Aoun Iranian puppet, instead of blocking roads and burning garbage cans!

It is a Venezuelan/Ukrainian scenario happening but we need to avoid the bloodshed!

The Lebanese are a bunch of unserious people who like to hit utensils instead of building a country. They are bribed with 100 dollars at election time and vote for the corrupt politicians, and then go on the street like stupid bunch of people asking for the expunging of politician they themselves voted for them. Do you then still believe in the Lebanese. They are more corrupt and useless than their leaders, and by that, I mean the revolution, which is made up of a bunch of lunatics useful for nothing.

"the_roar:
only 2 people are working for Lebanon as we speak.
General Aoun & Walid Jumblat....the rest pffttttt."

Aoun and Basil are, unfortunately, the only Christian fig leaf left for HA and as such are being allowed to destroy the country for Iran’s sake. Tfeh.