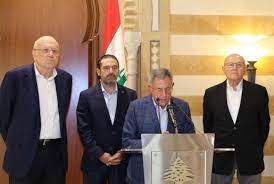 Bitar issued the subpoena after Diab refrained from attending an interrogation session on Thursday. The judge scheduled a new session for September 20. According to a judicial source, security forces have been ordered to bring Diab to the main courthouse in Beirut 24 hours before the session.

In a joint statement, the former premiers lashed out at the decision, warning that “never in the history of Lebanon has a subpoena been issued for the head of the Lebanese government in the manner that has been written by the investigative judge into the port bombing crime, Judge Tarek Bitar.”

“This precedent is dangerous in all of its political, national and constitutional aspects and it is a non-innocent measure exploiting the law and the fury of the victims’ families to target the Premiership without the other top positions of the Lebanese state,” the statement said.

Reminding of President Michel Aoun’s acknowledgement of his knowledge of the presence of the ammonium nitrate shipment at the port, the ex-PMs noted that the President “showed negligence and refrained from doing anything of practical value to avert that humanitarian, economic and urban disaster that hit Lebanon.”

“This means that the President’s immunity should also be lifted regarding this dangerous crime that hit Lebanon, and accordingly the investigative judge would be liberated of texts that do not grant him legal and constitutional rights to try presidents and others,” the former premiers added.

They also charged that Bitar’s measure is “politically suspicious because it complements attempts that have not stopped for years to overthrow the Taef Accord, break the prestige of the Premiership and besiege its position in the political system.”

What’s most infuriating is that Michel Aoun hasn’t been summoned by Bitar yet he acknowledged publicly that the ammonium nitrate was stored at the port.

The question is why isn’t he getting summoned? Why mr Bitar?

Because Bitar is Aouni, assigned by the Aouni justice minister.

nice demonstation of transparency and respect towards the independence of the judiciary, especially from the one currently designated for the formation of the government... are this the basis upon which he is going to build the new Lebanese executive? still holding onto the privilege of the caste and perpetuating the escape from accountability? Shame on them!!

Bitar's measure against Diab not enough, call them all.

Except, he can't..
Nasrallah 07 August 2021: "the port case is politicized and selective and we won't accept that anyone be persecuted."