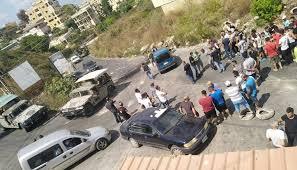 The situation in the southern towns of Maghdouche and Anqoun was "calm" on Monday after the army's intervention, MP Michel Moussa, who hails from Maghdouche, said.

"The army imposed measures on the ground and the pacification contacts have succeeded," Moussa said in an interview with the Voice of All Lebanon radio.

Moreover, he called for "halting the incitement and working on alleviating the tensions," adding that "the cover has been lifted off all violators" and that arrests were underway.

The Amal Movement meanwhile denied any involvement in the violent incidents between residents from the two towns.

The unrest had started after young men from Anqoun attacked gas stations in Maghdouche and tried to reopen them by force, defying measures by the town's municipality to organize the sale of gasoline.

Policemen from the Maghdouche police station later staged raids in Anqoun in search of young men who assaulted one of Maghdouche's residents, which infuriated Anqoun residents and prompted them to block the road linking the two towns and burn a number of trees.

It looks like the Shia don’t get along with anybody.