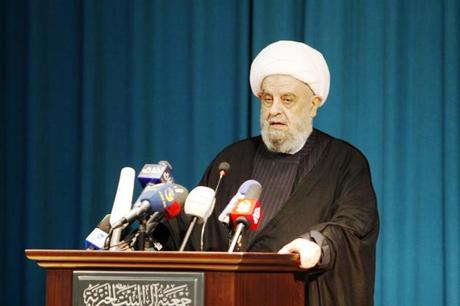 Qabalan was born in 1936 in the southern town of Mays al-Jabal. He returned to Lebanon in 1963 after finishing his religious study in Iraq’s Najaf. He became the head of the Higher Islamic Shiite Council in 2017 after serving for a long time as its deputy chief.

Mourning the late cleric, President Michel Aoun described him as “an advocate of accord, solidarity and unity, and a struggler for coexistence.”

Berri for his part said Qabalan continued the path of Imam Moussa al-Sadr in “moderation, coexistence and resisting deprivation and occupation.”

Hizbullah chief Sayyed Hassan Nasrallah meanwhile said the late spiritual leader was “a strong defender of the Palestinian cause” and “a strong supporter of the resistance in Lebanon.”

Maronite Patriarch Beshara al-Rahi for his part reminded of Qabalan’s “good relation” with Bkirki and his defense of “coexistence and unity.”

Grand Mufti Sheikh Abdul Latif Daryan, Lebanon’s top Sunni Muslim cleric, also mourned Qabalan, describing him as “a man of stances” and “an icon of the icons of Islamic unity in Lebanon.”

Former premier Saad Hariri said Qabalan was “characterized by kindness and frankness” and that he “dedicated his life to serving Lebanon and its unity.”

How Sad....
Sheikh Abdul Amir Qabalan was someone I looked up to. He taught me everything I know about the Mahdi and his comrades.