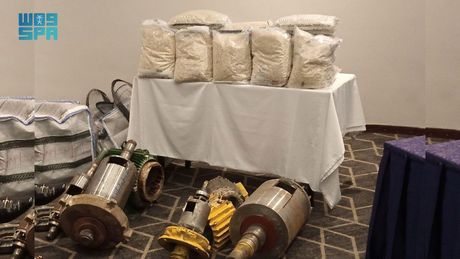 The Saudi and Nigerian interior ministries have thwarted an attempt by a network linked to Lebanon’s Hizbullah to smuggle 451,807 amphetamine tablets into Saudi Arabia, the Saudi ministry said on Thursday.

The security spokesman of the Saudi interior ministry, Colonel Talal al-Shalhoub, stated that the drug bust followed “proactive security follow-up of the activities of criminal networks that smuggle drugs into the Kingdom of Saudi Arabia.”

The spokesman added that the tablets were supposed to be smuggled into the kingdom by sea from Nigeria after arriving in the African country from Lebanon.

Noting that the pills were hidden inside mechanical equipment, Shalhoub said the shipment was seized in Nigeria in coordination with the African country’s authorities.

God bless our Shia resistance for foiling the siege imposed on our beloved country by the Saudi-American-Israeli-Sudani-Bengali-Africani-Morocani-Singali-Bahraini-Emirati coalition.

By exporting 451,807 amphetamine tablets to Saudi Arabia via Nigeria, our Shia resistance has shown innovative ways to circumvent sanctions and reduce our trade deficit while increasing exports. Our Shia resistance has proved itself on the battlefield and is now proving itself as a capable and competent economic power.

Hiznullag are well known worldwide as a criminal organisation. Only in Lebanon there are those who bury their face in the sand and don't want to see the true rotten face of Hizbullah.

Hezbcocaine is disgusting... their stupid supporters just want to close their eyes...