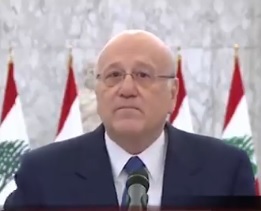 Lebanon's new Prime Minister Najib Miqati pledged Friday to do everything in his power to halt the country's dramatic economic collapse, urging fractious politicians to work together after a new government was announced -- the first in over a year.

Holding back tears, Miqati, one of the richest men in the country, spoke about Lebanese mothers who cannot feed their children, and students whose parents can no longer afford to send them to school.

"The situation is difficult but not impossible to deal with if we cooperate," Miqati told reporters at the presidential palace, where the new government was announced.

The agreement breaks a 13-month deadlock that saw the country slide deeper into financial chaos and poverty over the past year.

Mikati, a businessman tycoon from the northern city of Tripoli, was tasked with forming a new government in July. He is widely considered to be part of the same political class that brought the country to bankruptcy. He served as prime minister in 2005 and from 2011 to 2013.

"I hope we can fulfill people's aspirations and at least stop the collapse," he said Friday. He said the government will launch a rescue plan for the country.

"We will make use of every second to call international bodies and ensure the basic everyday life needs," he said, adding his government would also turn to Arab countries for help.

Tears of joy for him and his ego… nothing else.

Well said, Marcus Aurelius! If all the corrupted billionaire political class let go of the 10th of their fortune, more than half of the 'poor' in Lebanon would be fed and taken care of!

Up until now... the only thing he has offered is to seek for donations from foreign countries.
He has a hezbollah government, and well known mafiosos from the FMP.
What can people expect from this HUGE load of crap!?