Cabinet Approves Policy Statement of 'Together for Rescue' Govt. 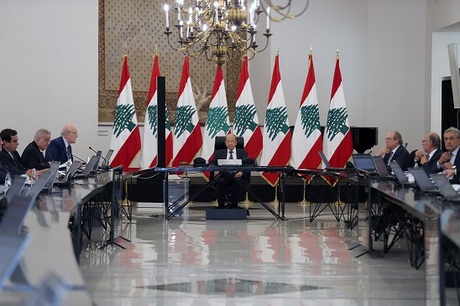 Cabinet on Thursday unanimously approved the ministerial statement of Najib Miqati’s third government, after a ministerial committee held three meetings to finalize it.

The Presidency said the statement was passed with some “minor amendments,” noting that the new government has been called the “together for rescue” government.

The statement calls for “instant negotiations with the International Monetary Fund as necessitated by priorities and the national interest.”

It also stresses the need for “cooperation between the government and parliament over in everything needed to reach the truth of the port explosion,” emphasizing that “the issue of immunities is linked to legal texts.”

Information Minister George Kordahi meanwhile announced that Cabinet did not discuss the issue of the Hizbullah-imported Iranian diesel seeing as the session was dedicated to the ministerial statement, noting that “no decision was taken to lift subsidies off fuel.”

Economy Minister Amin Salam for his part underline the government’s “keenness on citizens,” reassuring that the issue of lowering the prices of commodities will be followed up.

So, Amal, Hezbollah, Mustaqbal, Bassil & the Aounis, Junblatt, Miqati and Franjieh came together and formed 'Together for Rescue' government?