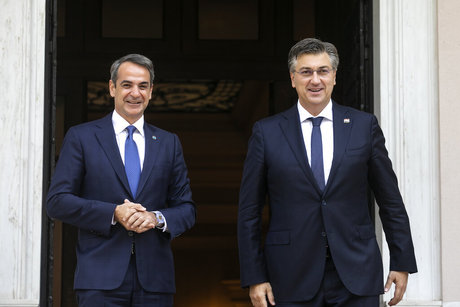 Nine European countries on the Mediterranean are holding a summit in Athens Friday afternoon to discuss issues ranging from climate change to migration and Afghanistan.

The one-day gathering, dubbed the EUMED 9, brings together the leaders of Spain, France, Italy, Malta, Greece and Cyprus, and recent additions Slovenia and Croatia. Portugal is sending its foreign minister, while European Commission head Ursula von der Leyen will also attend the meeting.

Climate change and its effects on the region will be the first topic of discussion, after this summer saw devastating forest fires sweep the region. Greece was particularly badly affected, with the country's worst heat wave in decades fueling hundreds of wildfires that stretched its firefighting resources to the limit and saw it appeal for international help.

Greek Prime Minister Kyriakos Mitsotakis blamed the fires on climate change, and has promised to make tackling what he has described as a climate crisis one of his government's main priorities.

The leaders are expected to issue a joint declaration at the end of Fridays' meeting "which sets out clearly the priorities of all countries of the European Mediterranean toward climate change," Mitsotakis said, ahead of a meeting with his Croatian counterpart, Andrej Plenkovic, before the start of the summit.

Migration will be another main topic of discussion, with Greece, Italy, Spain and Malta lying on the major routes smugglers use to get people into the European Union.

Greece has long been the fastest route into the EU, with its eastern Aegean islands lying close to the Turkish coast. Both Greece and the broader EU have been anxious to avoid a repetition of 2015, when around a million people, many of them fleeing the war in Syria, crossed into the bloc, the vast majority arriving on Greek islands from Turkey.

Alarmed by recent events in Afghanistan, Greece has made clear it is further toughening its stance toward migration. It has already been beefing up border security, employing technology and increased patrols on land and at sea to keep potential migrants out.

The country has also been broadly accused by rights groups and migrants themselves of carrying out illegal summary deportations at sea of people who reach Greek islands, without allowing them to apply for asylum. Greek officials vehemently deny the claims, but do say they are robustly patrolling both land and sea borders.

During the conference, Greece and Cyprus are also expected to bring up the issue of Turkey, a neighbor with whom they have a series of disputes, including over energy exploration rights in the eastern Mediterranean.