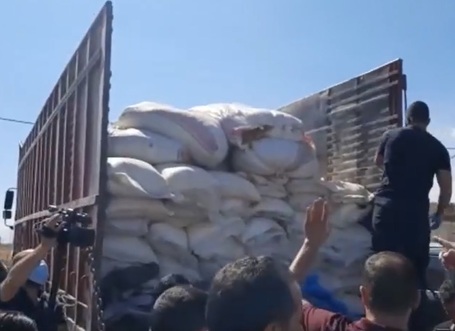 Interior Minister Bassam Mawlawi on Saturday inspected a truck carrying 20 tons of ammonium nitrate in the Bidnayel Plain in the Bekaa after it had been seized in Baalbek, the National News Agency said.

“I’m here to follow up on the investigation and not to expose its details. I will not reveal any names or detainees. I’m here to laud the work, vigilance and prudence of security agencies,” he added.

"We must do our best to move these materials to a safer place away from exposure to heat and sun" to avoid a "catastrophe," Mawlawi said.

The company that owns the ammonium nitrate said that the fertilizer was intended for agricultural use.

"One of our employees informed the relevant authorities that we have ammonium nitrate, so they raided the warehouses on Friday," one of the company heads told AFP on condition of anonymity.

The name of the firm that owns the fertilizer has not been made public pending investigations.

"We have been working in the feed and fertilizer industry for 40 years," the company official added.

The explosion of hundreds of tons of ammonium nitrate at Beirut port on August 4 last year had killed at least 214 people, injured thousands and ravaged entire neighborhoods.

It emerged later that officials had known that the highly volatile substance had been left to linger unsafely at the port for years, in a warehouse close to residential neighborhoods.

Seized then to be surrendered to hizbulah who has the monopoly on this explosive fertilizer.

How did 20 tons of Ammonium Nitrate enter Lebanon?

Give me a break, who would dare touch the shipment unless instructed to do so? What are they cooking up now, let’s see what they come up with to distract their involvement in the load at the port.

I’ll bet they are going to claim that it is owned by the Syrian opposition or Isis.