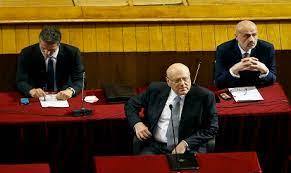 Lebanon's parliament met Monday to vote in Prime Minister Najib Miqati's cabinet, tasked with pulling the country out of a deep economic crisis, in a session delayed by a power cut.

No major objections were expected to Miqati's ministerial lineup from top political blocs as Lebanon is in desperate need of a new government following 13 months of political deadlock.

Miqati's 24-member cabinet, unveiled last week after protracted horsetrading, will be expected to offer solutions to shortages of medicine and fuel and to launch a ration card program to protect the poorest.

It will have to pursue negotiations with the International Monetary Fund (IMF) and oversee preparations for parliamentary elections scheduled for May 2022.

Lebanon's economic collapse has depleted central bank reserves, devalued the currency by more than 90 percent and plunged three out of four citizens below the poverty line.

The country is grappling with almost round-the-clock power cuts that have plunged homes into darkness and paralyzed hospitals, schools and government offices.

Monday's session was scheduled to start at 11 am (0800 GMT) in the UNESCO Palace but was delayed by around an hour because of a power cut, parliament's secretary general Adnan Daher told AFP.

Videos circulating on social media showed lawmakers gathering in a courtyard outside the building before electricity was restored.

"This is embarrassing," lawmaker Taymour Jumblat told a reporter. "This is not a country."

Miqati, reading a statement to lawmakers ahead of the confidence vote, pledged to "resume talks with IMF and develop a plan to revive the economy."

The new premier also vowed to hold timely and transparent elections, and adjust salaries weakened by the devaluation of the Lebanese pound.

He pledged to restore the confidence of the international community, which has grown increasingly frustrated with the country's leadership.

Miqati was interrupted by Speaker Nabih Berri, who asked him to speed things up because of a risk that the power may be cut again.

Enough of this stupid Power cuts! Get the fuel for the power plants now!
And stop making fake promises!