Report: Elections in March, Expats Won't Vote or Have Seats 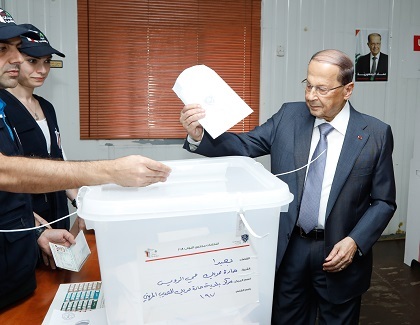 The rules according to which the parliamentary elections will be held in spring have been specified, “credible sources” told al-Joumhouria newspaper.

“The parliamentary committee tasked with studying the file has agreed on a host of essential points,” the sources said in remarks published Thursday.

According to the sources, the elections will be held according to the current law, which divides Lebanon into 15 electoral districts, while applying proportional representation in some electorates and allowing one preferential vote.

The date of the elections will meanwhile be brought forward from May 8 to March 27 so that does not fall in the Muslim fasting month of Ramadan.

“Expat voting will not take place for logistic and financial reasons and the article stipulating the creation of six parliamentary seats for expats will be scrapped,” the sources said.

As for the magnetic card stipulated by the current electoral law, it has been decided to refer its issue to the government, although most MPs believe that it will be impossible to produce the cards before the elections, the sources added.

A legislative session will meanwhile be held in the coming weeks to introduce amendments to the current law, especially as to scrapping expat voting and expat seats and the issue of magnetic cards and mega-centers.

The Free Patriotic Movement is meanwhile opposed to calling off expat voting, while the parliamentary committee has failed to agree on axing the current electoral law and introducing a new one based on proportional representation with entire Lebanon turned into a single district, the daily said.

Impossible produce the ration cards before the election? What kind of BS is this? People are in desparate need of help, and the government is delaying this? And those those who are behind this, have but one agenda. They are determined to use the Ration card as a tool to manipulate people to vote for their party. This is beyond criminal!

If it was not for the expats and their support, Lebanon would have starved to death

What you see is what you get....totally corrupted state