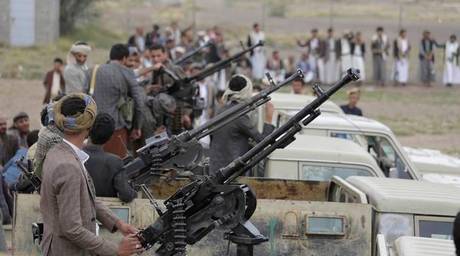 Fighting flared up this week between Yemen's Houthi rebels and pro-government forces in the country's southern province of Shabwa, killing 35 from both sides, tribal leaders and security officials said.

Clashes are now in their third day in several districts of the largely government-controlled province, including Bayhan and Usaylan, said the officials and the elders. Dozens have been wounded on both sides, they said.

Yemen has been convulsed by civil war since 2014 when the Iran-backed Houthis captured the capital, Sanaa, and much of the north of the country, forcing the internationally recognized government to flee to the south, then to Saudi Arabia.

A Saudi-led coalition entered the war in March 2015, backed by the United States, to try restore the government to power. Despite a relentless air campaign and ground fighting, the war has deteriorated largely into a stalemate and spawned the world's worst humanitarian crisis.

In Shabwa, government forces regained control of some of the areas that Houthis had captured earlier this week, the officials said. The officials and the elders spoke on condition of anonymity because they were not authorized to brief the media.

The rebel offensive on Shabwa is believed to be aimed at disrupting a key line of communication through which pro-government reinforcements are sent to the central province of Marib, where fighting has been raging for several months.

The rebels have accelerated their push to take Marib in recent months, while escalating cross-border attacks on Saudi Arabia. Meanwhile, the Saudi-led coalition has launched dozens of airstrikes on towns in Marib — including Rahbah, Sirwah and Madghel — to back pro-government ground forces,