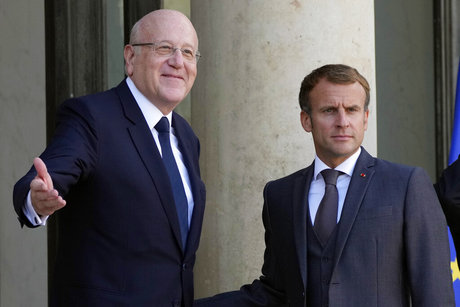 After repeating previous criticisms of Lebanon's political class, Macron told Miqati it was "urgent to implement measures and essential reforms."

“I will not abandon Lebanon and France will not let Lebanon down, but the path is difficult and the mission is tough. However, we will stand by the Lebanese people and I want Lebanon to know that it can count on France,” the French leader added.

Turning to the issue of the Beirut port explosion, Macron said Paris continues to “support the work of the judiciary in a neutral and transparent way, because the Lebanese people deserves to know the truth.”

He added: “We will maintain our support for Lebanon, hand in hand with the living forces in the country, and we will rally international support to secure urgent assistance.”

Macron also pledged that Paris will help Lebanon in the infrastructure and power sectors, urging Lebanon to launch negotiations with the International Monetary Fund combat corruption.

Miqati for his part said that reforms will be necessary to “launch promising negotiations with the IMF,” adding that his government is keen on holding the parliamentary elections on time.