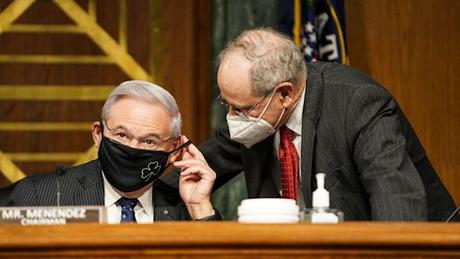 U.S. Senators Jim Risch and Bob Menendez, ranking member and chairman of the Senate Foreign Relations Committee, have released a statement in reaction to the suspension of Judge Tarek Bitar’s investigation into the 2020 Beirut port blast in the wake of legal motions calling for his dismissal.

“We are extremely concerned by the suspension of Judge Tarek Bitar’s investigation into the devastating August 4, 2020, explosion at the Port of Beirut which killed more than 200 people and injured thousands more. The Lebanese people, many of whom continue to suffer physical and economic impacts of the blast, deserve accountability for this tragedy,” they said in the statement.

Furthermore, Risch and Menendez said they are “alarmed by Hizbullah’s reported role in driving the decision to suspend this critical investigation.”

“Judge Bitar is a respected, and by all accounts impartial, jurist with over a decade of service to his country as a judge. It is incumbent upon the Lebanese government to ensure that judges and other investigators can safely carry out their duties and complete this investigation,” the senators added.