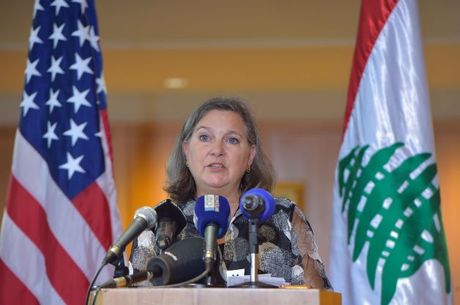 U.S. Under Secretary of State for Political Affairs Victoria Nuland met with Lebanese leaders on Thursday, on a visit whose schedule was thrown off by the deadly Tayyouneh clashes -- the most dangerous round of sectarian fighting that the country has witnessed since 2008.

Speaking at a press conference that followed her meetings with the country’s leaders, Nuland offered condolences on behalf of the American people for “the tragic loss of life” in the clashes.

“We join the Lebanese authorities in their call for calm and de-escalation of tensions. The health and future of Lebanon's democracy depends on the ability of its citizens to address the difficult issues ahead for their country -- peacefully, and through dialogue, and with confidence in the rule of law,” she added.

Noting that she visited Lebanon at the request of U.S. President Joe Biden and U.S. Secretaries Antony Blinken and Janet Yellen to express “support for the aspirations of the Lebanese people for security, for economic stability and for transparent and accountable governance,” Nuland decried that “terrorists and thieves have robbed them of hope for far too long,” in an apparent jab at Hizbullah and the country’s political class.

“After years of suffering, all Lebanese deserve better. The task ahead is daunting, but we stand with Lebanon as it does the hard work to restore economic stability and basic services, including reliable electricity, health care, and education to get this country on a sustainable path and back to prosperity,” the U.S. official added.

In her meetings with Lebanese officials, she said that she “underscored the importance of complete transparency and open books as Lebanon re-engages with the International Monetary Fund and the World Bank.”

“The Lebanese people deserve to know where their money has gone and to have confidence in their economic future. We also urged prudence and accountability in the use of Lebanon's more than a billion dollars in IMF Special Drawing Rights. This money belongs to the Lebanese people and must be used for their benefit. We also underscored the importance of free and fair elections next spring, and we were energized in our meeting with civil society this morning by the excitement that we felt among them for the opportunity for the next generation of Lebanese leaders to help shape a positive future here,” she added.

Commenting on the port blast investigations, Nuland stressed that “a clean, impartial, independent judiciary is the guarantor of all the rights and the values that we, as democracies, hold dear and share.”

“Again, the Lebanese people deserve no less, and the victims and families of those lost in the port blast deserve no less. Today's unacceptable violence makes clear what the stakes are. As the Lebanese people and government and leaders and civil society take the very difficult steps forward to bring stability, health, prosperity, and security back to this beautiful country, the American people, the American government stands with them,” she added.

Asked about the Hizbullah-procured Iranian fuel deliveries in Lebanon, Nuland said that what Iran is offering is a “publicity stunt.”

“A bunch of trucks full of dirty stuff that is not sustainable for the Lebanese people,” she added.

Thank you USA and thank you Trump 2024