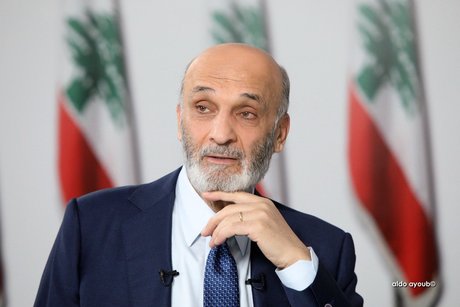 Lebanese Forces leader Samir Geagea has described Thursday’s deadly clashes in the Tayyouneh-Ain al-Remmaneh-Shiyyah area an an attempt by Hizbullah to stage a “mini” May 7-like armed campaign against “Christians” with the objective of halting the probe into the Beirut port blast.

Asked whether he takes credit for “foiling a new May 7,” the LF leader said: “No, it wasn’t Samir Geagea who foiled the new May 7 but rather the alive people present in Ain al-Remmaneh.”

“It is true that we are present on the ground, seeing as we are present in all regions and we’re not absent from any issue… but the claims about a military structure are totally baseless and the Lebanese Army is the only party that knows the facts as they are,” Geagea added in an interview with the journalist Walid Abboud via Sawt Beirut International.

“The claims about a supply route and paramilitary deployment are completely unfounded and the presence there was the natural presence of the young men in their neighborhoods. As for the talk about snipers, the army has arrested snipers, let it say who they are and where they came from,” the LF leader said.

Dismissing accusations by Hizbullah and Amal Movement that what happened was “an ambush against a protest,” Geagea stressed that this is also untrue and that it wasn’t the LF who “defended the area” but rather “all of Ain al-Remmaneh’s residents.”

“Before any shot was fired, four people from Ain al-Remmaneh had already been wounded, also before anyone from the other side was killed or wounded,” Geagea added, voicing sorrow over the Hizbullah and Amal supporters who were killed and wounded while blaming “their leaderships who dragged them into that position.”

The LF leader also decried that the army’s Intelligence Directorate is summoning people from Ain al-Remmaneh for interrogation. “They were sitting in their homes and neighborhood. It is fine, summon them, but you should have summoned those who came to attack them,” he said.

Told that al-Manar TV has claimed that “the LF snipers are known by names,” Geagea said: “This is untrue. Let them hand over the alleged names to the Lebanese Army.”

Asked whether he and the LF are “prepared for war,” Geagea said: “No, but if someone wants to attack us, we will always do this. However, this is something and having an armed organization is something else. But let no one think that we will die with open eyes; they will be very mistaken.”

“This is not a declaration of war, but our dignity is very dear to us and we do not accept to be attacked by anyone, period,” Geagea added.

Whoever was responsible for killing these thugs is a hero in my book. Geagea was and still remains the rock of Lebanon. I might not agree with some of his politics but he remains the only person serious about defending Lebanon's sovereignty.

Here is a video that shows your terrorists in Ain el-Remmaneh shouting out sectarian slogans and start beating people up and destroying property and that was before any shots fired.

My recommendation to hizbolla is to start thinking of immigrating to Kabul to defend the Shia.

Do not try to come near bitar area anymore. There won't be next time because you won't return home.

Shia and Druze aren't Muslims just like the Church of Scientology isn't Christian.

Mystic. We are tired to bow our heads to your weapons. We are tired of your intrusions in our regions, breaking things and killing people each time you get angry. We are tired of your sclerosing our government and preventing us to progress. We are tired to share our country with you.
We are more intelligent than you, more educated than you, better connected than you and richer than you. We have shut up till now because we want to give a chance to our living together. Do you think weapons are difficult to get?
If you do not come into the fold of the lebanese state there will be a civil war. And you will lose your weapons then. Or keep them. But we will split the country. You can terrorize your shia brothers all you want.

"No shia groups were inside Ain el-Remmaneh"

No.5 would mean total annihilation of both Lebanese sides.

Who needs Israel as an enemy when all sides inside Lebanon are at loggerheads with each other.
Many more Lebanese have been killed, maimed or wounded by fellow Lebanese than have been by Israel.