Gemayel Calls for 'Withdrawing Parliamentary Legitimacy' from Hizbullah in Elections 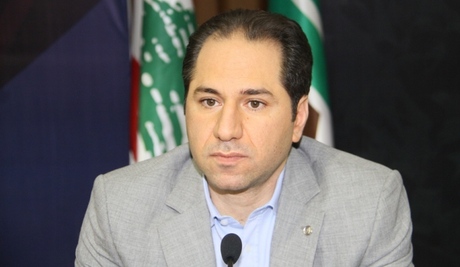 Kataeb Party chief Sami Gemayel has called on the Lebanese people to “withdraw legitimacy from Hizbullah’s actions” through voting for change in the upcoming parliamentary elections.

“We’re not speaking of eliminating Hizbullah. We are saying that the battle will withdraw the legitimate cover it had gained from institutions,” Gemayel added, in an interview with Annahar newspaper published Tuesday.

Commenting on the deadly Tayyouneh incidents, Gemayel said “the entire Lebanese people were a victim of what happened.”

“Together with our young men, we are present in this area (Ain al-Remmaneh), and it is normal to be alongside our people. We are not doing something extraordinary; we are naturally present and we belong to the area’s fabric when it faces danger. Residents defend themselves and certainly there will be Kataeb members defending themselves among the residents,” Gemayel added.

He, however, noted that Kataeb “will not pour oil on fire.”

“We believe that that cannot lead to a result. We have not abandoned the area and I’m the only one who visited it on the day of the troubles,” Gemayel added.

As for the political and security situations in the country, the Kataeb leader said there is “an attempt to undermine the judiciary and eliminate its role and credibility.”

He added: “In my opinion, the coming period will witness an attempt to target the Lebanese Army and disintegrate it, seeing as it is the last bulwark for Lebanon’s unity and the state’s image.”

For those of you living abroad... register and vote!
https://diasporavote.mfa.gov.lb/

The elections are rigged, remember the electoral law was modified 4 years ago to keep the same people in power ad vitam .

The best course of action is the Iraqi one, abstention followed by a revolution.

Unfortunately, our people are completely incapable to revolt, take it to the streets, or obtain anything from the so called state.
I also think that the elections are rigged to some extent (especially in Baalbeck hermel), but personally, I will make my duty and vote anyway. I will vote for the civil society as i did last time, and hope that some seats will go through. this is what all my friends will be doing. I see no other alternative for now.
I also think that if everyone thinks like you, no one will vote, and things will never change.You need to give it a shot. What do you have to lose?

It’s the eternal dilemma my friend, the risk of voting is legitimizing the elections and the crooks… on another hand a low turnout sends a clear message as well to them and to the international community so they know how to deal with them.

The good news is that they didn’t accept the 6 seats for the expats, because most Lebanese citizens are abroad… so far, I can tell you that no one in my entourage plans on voting…. Plus being forced to vote for people of my own sect doesn’t sound appealing at all.

Well you know... the latest elections showed poor participation but the thugs got elected anyway. That strategy clearly doesn't work. You cannot complain about having the same rulers over again and not doing anything to change that.
We still have this sacred power in Lebanon. We have the choice. Vote my friend.
PS: I agree that the system is not good and sectarian. But for the moment, this is what we have. We shall change it later.

Gemayel doesn't get away from Miami much at all these days.

Kataib and lebanese forces are killer parties.
Christians, sunnis and shias should support Hezbullah that is the only stability and peace factor in Lebanon.
May God Bless Hezbullah and its supporters who are real human beings.

Dearest Muhammad. Hezbollah are Iranian cowards, bombers and terrorists.
They are the furthest creatures from human beings. They are desperate, and full of inferiority complex. They will never prevail. NEVER!