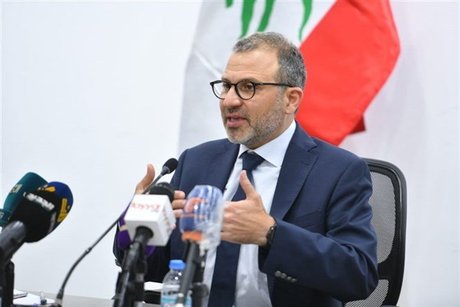 Free Patriotic Movement chief MP Jebran Bassil on Tuesday lamented what he called “a legislative massacre against the electoral law,” after parliament voted to cancel six parliamentary seats for expats stipulated by the 2018 electoral law.

“We will file an appeal over the issue of expat voting because the constitutional principle is clear and it has been violated. This is a constitutional, political and national violation,” Bassil said after a parliamentary session.

“It is shameful to say that expats only know Lebanon through ‘kibbeh and sfiha,’ they are not a decoration as some have described them,” Bassil added, referring to two traditional Lebanese dishes.

He also decried that setting March 27 as a date for the elections is “manipulation” amid expected bad weather and the Christian fasting season.

As for the postponement of the decision on women’s quota, the FPM chief said “our proposal which includes granting women the ability to be represented by at least one seat in every electoral list could have been adopted.”

The Constitution says Christians get half the seats regardless of votes. Who wrote this Constitution, anyway?

While Bassil is completely correct when it comes to the electoral megacenters he's completely wrong on the six parliamentary seats for expats. With the electoral megacenters the weather will no longer have much effect as voters will be able to vote were they live rather than having to drive all the way to their towns to vote. If the expats vote in all 128 electoral districts they could potentially affect the change in every single one of those districts. This will be disastrous for Bassil and his FPM. By voting for only six seats the best they can do in change six seats only.

"expats only know Lebanon through kibbeh and sfiha" and freekeh! You forgot the freekeh little man. Did you forget that future Lebanon will have a freekeh based economy LOL.

"the decision on women’s quota". 9 ministers for Bassil/Aoun in the Mikati cabinet and only one woman, Najla Riach, representing by halfsies both Aoun and Mikati.