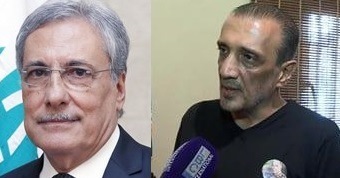 A delegation from the families of the Beirut port blast victims on Wednesday visited Justice Minister Henri Khoury and handed him a letter that was referred, at their request, to the Higher Judicial Council.

The delegation was led by Ibrahim Hoteit, a former spokesman of the grouping of families who recently appeared in a surprising video in which he made a U-turn in his stance on lead investigator Judge Tarek Bitar. The majority of families distanced themselves from Hoteit’s new stance and said the video was likely recorded under duress.

William Noun, an outspoken member of the families grouping, said Hoteit “only represents himself and two other families.”

In a statement on behalf of the families, Noun added that Hoteit “has no right to act or speak on our behalf.”

“The families of the port martyrs and victims stress their insistence on supporting the judiciary and Judge Tarek Bitar,” Noun said.

Pro-Hizbullah journalist Salem Zahran meanwhile said that the Hoteit-led delegation handed Khoury a letter demanding “the removal of Judge Tarek Bitar from the case” and that the letter was “referred to the Higher Judicial Council.”

Hoteit’s martyred brother is rolling over in his grave. Shameless thug!

Sorry to say but Lebanese people in general have no ethics or a morale compus. They will sell their own brother for a USD. This whole thing is smoke and mirror to keep the ruling party in power without any accountability. They are telling the sheep if the investigations continue it will lead to civil unrest and or civil war, unles a brain dead judge is in place that will find out that the Zionist with the Mossad sleeper cell did it and Israel is to blame. Lebanon is no more

Sadly not all Lebanese Shiites are as fearless as Lokman Slim to name one and that's understandable. They tried to intimidate, threaten and frighten Lokman, accused him of treason and of being a foreign agent, just because as an educated free thinking intellectual, he disagreed with their close mindedness and archaic world view, when he wouldn't budge they murdered him.

5-7 Don't forget that Slim was the first one to explain that Ebola was stocking the nitrate in the port and progressively sending it to the Syrians who were using it as barrel bombs..

Let's display the video that his wife told reporters how Amal farm boys beat him up and threw his face on the ground sewer metal system in the street.