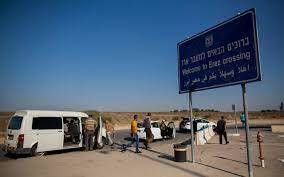 Israel said on Wednesday it would issue 3,000 more permits for merchants from Gaza to enter Israel, the latest measure aimed at boosting economic conditions in the blockaded strip.

The Israeli defense ministry body responsible for civil affairs in the Palestinian territories, COGAT, said the number of merchant permits would be increased from 7,000 to 10,000.

"The permits will be issued only to those already vaccinated against, or recovered from Covid-19," COGAT said.

Israeli Prime Minister Naftali Bennett opposes Palestinian statehood but has said his government is committed to improving livelihoods in Gaza and the occupied West Bank.

Permits to trade and work in Israel are a lifeline for Gaza's 2.1 million residents, who have endured an Israeli blockade since 2007, the year Hamas Islamists seized control of the enclave.

Unemployment in Gaza was 43 percent before May, when Israel bombarded the territory in response to Hamas and other militant groups firing rockets into Israel.

Jessica Montell, executive director of the Israeli rights organization Hamoked, said the permits will be "hugely significant" but only for a small group.

"The broader problem is Israel's closure of the Gaza Strip," she said.

This just goes to prove that the "man in the street" in Gaza wants to work, in co-operation with Israel, or even in Israel itself, in order to simply improve their standard of living.
It is only the terrorist Hamas organisation, and not Israel, which is preventing this for over 12 years.