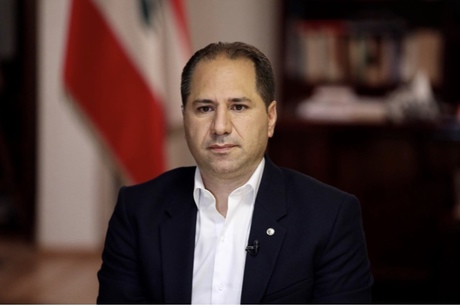 Kataeb Party leader Sami Gemayel, who is visiting the U.S., has called through MTV for “raising the voice in the face of the hegemony that Iran is practicing on Lebanon through Hizbullah.”

“We want all the world capitals to know that there is a major effort to unify the ranks of the opposition in Lebanon. We are also interested in supporting the Lebanese Army, which is facing major attempts to tarnish its image and role and is being subjected to huge political pressure in order not to perform its duties,” Gemayel added.

“Hizbullah’s intimidation is rejected and we will not fear it,” the Kataeb chief emphasized.

Noting that the differences between Kataeb and the Lebanese Forces party are “known” and that he does not want to re-mention them, Gemayel lauded the LF for the “change in its performance.”

“The LF’s performance is now in the right direction and it is clearer regarding the confrontation which we consider to be open between us and Hizbullah,” Gemayel added.

“There is a big transformation in the LF’s policy since the election of Michel Aoun as president and this is something positive,” the Kataeb leader went on to say.

In an interview with the Washington-affiliated al-Hurra TV, Gemayel noted that “Hizbullah does not have 100,000 fighters,” dismissing remarks by Hizbullah chief Sayyed Hassan Nasrallah.

“The Lebanese Army is certainly the strongest,” he added.