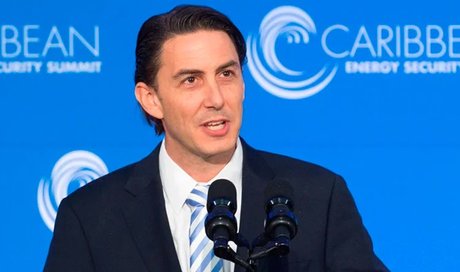 U.S. Senior Advisor for Global Energy Security and the newly appointed mediator in the U.S.-sponsored border talks between Israel and Lebanon, Amos Hochstein, has called for swift negotiations over the demarcation of the maritime border.

He said that the visit he made this week to Lebanon was aimed at determining “if we can achieve some breakthrough and to move forward on the demarcation efforts.”

Asked whether his visit means that the talks are “resuming,” the U.S. official told Al-Hadath TV: “I hope so.”

He added: “I came here today, really, first to listen, and to listen to the three presidents and to other ministers and the Chief of Staff of the military, and to understand the position that the Lebanese government has, and its views as to what's the best way to move forward.”

“As far as the question of whether or not this will be in Naqoura or in shuttle diplomacy, I think the meetings in the framework that was achieved between Israel and Lebanon with the support of the United States was an incredibly important milestone of having a framework that could facilitate talks and having indirect talks that are in person in Naqoura between the two sides, in the presence of the United States and the United Nations, was really important,” he went on to say.

Asked whether the process “will take lots of time,” Hochstein said: “No. I hope not. I think that in these kinds of efforts what we've learned is that if you take a lot of time, it doesn't happen. So we need to be focused, and we need to move quickly and efficiently to address really the needs of what this negotiation entails.”

The U.S. official also noted that he did not visit Lebanon “in an effort for normalization” between Lebanon and Israel.

“That's not on the table. It is just to address this one area. So to do that, you need someone that can talk to both parties, and to see if we can help the sides to narrow their gaps and ultimately reach a solution,” he pointed out.

“I hope that, and trust, and everything I've heard today, is that there's a commitment and a desire to reach a resolution,” he added.

Commenting on Lebanon’s electricity crisis and its relation to oil resources, Hochstein said: ”In 2016, when I was here, had we reached a resolution in 2016, today, you wouldn't have any blackouts in Lebanon. The lights would be going on and you would be paying the cheapest gas prices, because you need, paying consumers, Lebanese people, would be paying producer prices and you'd likely be exporting.”

“What I want is to have Lebanon as a producer, having billion -- multibillion dollar investments from foreign companies here in Lebanon, creating jobs, creating opportunity, creating economic stability,” the U.S. official said.

Responding to a question about recent media reports, Hochstein said: “I'm not looking at common reservoirs as an option. That was never my plan, nor is it now.”

As for Hizbullah’s announcement that it broke a “siege” on Lebanon by bringing diesel tankers from Iran, the U.S. official said: “Do you know why Hizbullah did not break the noose, or the blockade, or any of the other scary words? We never had a blockade. There was never a noose. So they didn't break anything.”

“We never attempted to stop fuel tankers from coming here. In fact, we have repeatedly -- our ambassador here in Beirut, and our senior officials -- we have always said: we want to see Lebanon succeed. We want to see fuel,” he added.

He also stressed that Washington has “a sanctions regime against Syria… not against Lebanon.”

“It has nothing to do with Lebanon.”

Now Michel Aoun received an Israeli diplomat in Baabda…. Which is far worse than him shaking hands with Ariel Sharon when Israel occupied Beirut in the really 1980s.