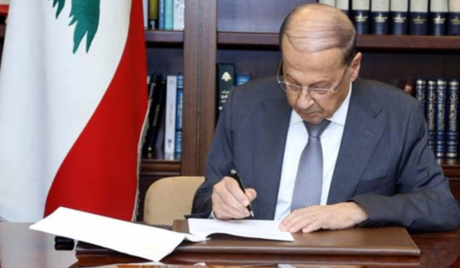 President Michel Aoun on Friday returned a bill amending some articles of the electoral law to parliament for reevaluation, the Presidency said.

The President cited “violations” contained in the bill, such as bringing forward the elections date from May to March and depriving segments of voters from their electoral rights.

Aoun argued that holding the elections on March 27 might prevent some voters from casting ballots in mountainous areas due to possible storms and bad weather.

He also said that bringing the date forward would shorten the timeframe for the registration of expat voters while lamenting that the bill extraordinarily suspends the implementation of the electronic card system and axes the six new seats dedicated to expats.

Moreover, Aoun noted that the proposed date would deprive 10,685 citizens who turn 21 between Feb. 1 and March 30 from their right to vote.

Parliament Speaker Nabih Berri later in the day called on the joint parliamentary committees to meet on Tuesday to study Aoun’s returning of the bill.

What does Lebanon need a Parliament and Government for, if the President can veto everything that they decide?

By the way what exactly will happen if after the revaluation of the Parliament they refuse to alter things? Can he veto it again and again and again?

No he cannot. It will go for a majority vote in Parliament and become effective whether this midget signs it or not.

The only reason the electoral date was moved to March, is to prevent Abbas Ibrahim to run against Berri for his 9th mandate. Since abbas needs 6months after leaving office to be eligible, berri invented this method to stay in power.

Berri arranged all this, and this drives Aoun crazy.

I see.... But Aoun who is so concerned with preserving the elections has not signed yet the bill sent to him by Parliament for holding supplementary elections to fill the seats vacated by 11 MPs who resigned following the 2019 revolution!