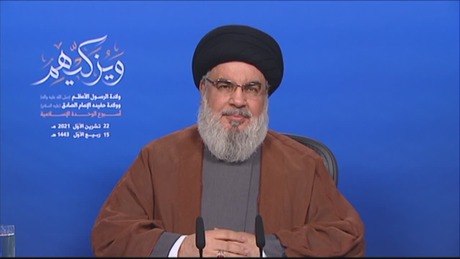 Hizbullah chief Sayyed Hassan Nasrallah on Friday vowed to follow up on the investigations into the deadly Tayyouneh incidents, as he described the probe as “serious, accurate and brave.”

“Things are judged by their outcomes and the political, popular and journalistic condemnation of those who killed, aggressed and almost dragged the country into strife and civil war must continue,” Nasrallah said in a televised speech marking the Prophet’s Birthday.

“We renew the praise of the awareness, prudence and wisdom of the families of the aggrieved martyrs, who will carry on with this stance,” Nasrallah added.

Turning to the issue of Lebanon’s stalled sea border talks with Israel, Nasrallah said he will not comment on anything related to border demarcation and that he leaves the issue to the Lebanese state.

He, however, warned Israel that it would be mistaken if it thought that it can act as it pleases in the disputed area.

“The resistance in Lebanon, certainly and at the appropriate moment, will act if it finds that Lebanon’s oil and gas are in danger, even if they are in the disputed area. It will act accordingly and it is capable of acting accordingly,” Nasrallah cautioned.

As for Lebanon’s expected negotiations with the International Monetary Fund, Nasrallah said: “We have no problem in the principle of negotiations and we hope Lebanon will have a truly unified delegation.”

Commenting on the dire economic situations in Lebanon in light of the latest hike in fuel prices, Nasrallah called for launching the ration card plan as soon as possible and agreeing to “the demands of employees as to raising transportation compensations and reviving public transport.”

The day this evil Iranian sectarian terrorist is brutally and violently murdered is the day we celebrate our true independence.

This guy again? 2 times in 5 days? Hassuna, jalla change the black diaper to a white instead!

He so much on TV you'd think auditioning to replace Ellen.

Ashrafcaptagon, you’d be of great help if you’re willing to sacrifice yourself by going to Hindistan and test them with cotton swabs… khomeyni style. ;p

To be honest i.report, I think Bashir Gemayel is more Qurayyshi than the black tire wearing Iranian who appears once in a while with threats, gives false historylessons and reminders to the horde. To support my claim please watch the 4 first minutes! You know anyone can claim all sort of crazy things these days, but becomes apathetic when forced to support the claim.

I watched it, it’s interesting. I wonder if he truly drives his car himself on a daily basis.
We all have unsuspected origins, I’m not joking I descend from Charlemagne and I have crusaders in my ancestry… yet I’m born simply just a Sunni Lebanese. Most people have amazing backgrounds but don’t bother to research it.

Nasrallah can say whatever. Most of us Lebanese are fed up with his dogmatic, theocratic and destructive attitude.
Separation of state power among executive, legislative and judicial is essential to a democracy. He wants to do away with all of that.
If we Lebanese do not face him down, then we really do not deserve an independent Lebanon.

Trying to use the Sheba'a paradigm, yet again!

Nasrallah: We re-applaud the awareness and wisdom of the families of the aggrieved martyrs.
He threatens a few and re-applauds, you have more Shiites that don't buy your line any more.

Time to lock this criminal and his basij in prison that destroyed Lebanon, our culture, freedom, democracy, independence and dignity, in complicity with Aoun/Bassil duo, if Lebanese have any drop of honor and courage left. A test for the army, free Lebanese and the international community!

Why are we still reading what this terrorist have to say. He is hungry for attention. Nah aren’t don’t give it to him. He is irrelevant for Lebanon future. Myself I am not reading what he has to say but commenting on your picture post. He is full of shit. He is a LIAR Period

I bet the Israeli leadership is shivering in its shoes following this declaration by Nasrallah. Who am I kidding?

What a lowlife SoB

It is getting hot in the sewage to go twice on TV, that's fine BUT:

Have we identified the source of firing in the air when you go on TV and the massive amount of bullets raining in Beirut innocent citizens and properties?

"Resistance" is a lie