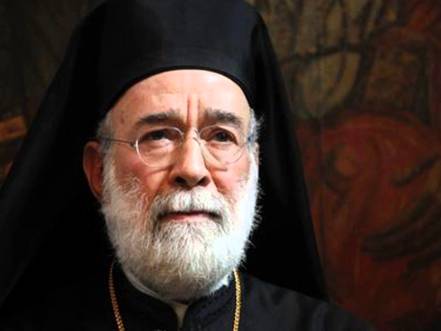 Greek Orthodox Metropolitan of Beirut Elias Aude on Sunday lashed out at Hizbullah and Amal Movement without naming them over the bloody incidents in Ain al-Remmaneh and Tayyouneh.

In his Sunday Mass sermon, Aude said "those possessed by the demons of corruption tried to evade testimony (in the port blast case) by storming civilian areas, terrorizing residents and school students, and accusing those who defended themselves of being the aggressors and killers."

"They were calling for truth and justice, but when that loomed, they became terrified and moved to bury truth and justice before they appear and topple those truly responsible for the country's ruin and collapse," Aude added.

He also accused those parties of "fabricating files" and "practicing oppressive intimidation and attacks against anyone who dares criticize, reject or confront."

Turning to the port blast probe, Aude described the lead investigative judge Tarek Bitar as a "ray of light" amid "what time and politicians have corrupted in the judicial authority."

"The people of Beirut will not remain silent or back down from their demand of the truth and they will not accept selective justice," the metropolitan emphasized.

He said it all. That's the truth.

God bless you and protect you from any evil harm dear metropolite Audi. You are always the voice of truth.
Thank you.

yes yes yes... zionist this... zionist that... evry time you people hear or read something you don't like you scream "zionist"! Sorry... but who gives a rat's a** about Israel? We are talking about our fellow Lebanese who are more Iranian than anything else, and this is what should trouble you dude. But no. Your sight is short. You need to blame zionists, americans, saudis, extra terrestrial, but never yourselves... Pathetic.

Zionist are those who pointed their RPG and B7 towards Ain el Romeneh residents instead of pointing to Israel.
Your leader is liar, you are the liar and Zionist and your grandfather cancerous DNA is liar.

Go to live in Iran mr anti Zionist. The anti Zionist paralyzed every Lebanese citizens regardless of religion.