German IS Bride Sentenced to 10 Years over Yazidi Girl Murder 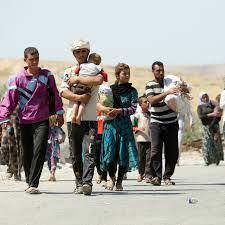 A Munich court on Monday sentenced a German woman who joined the Islamic State group to 10 years in prison over the war crime of letting a five-year-old Yazidi "slave" girl die of thirst in the sun.

Presiding judge Reinhold Baier of the superior regional court in the southern German city handed down the verdict to Jennifer Wenisch, 30, in one of the first convictions anywhere in the world related to the Islamic State group's persecution of the Yazidi community.

Wenisch was found guilty of "two crimes against humanity in the form of enslavement", as well as aiding and abetting the girl's killing by failing to offer help and membership of a terrorist organization.

Wenisch and her IS husband "purchased" a Yazidi woman and child as household "slaves", whom they held captive while living in then IS-occupied Mosul, Iraq, in 2015, the court found.

"After the girl fell ill and wet her mattress, the husband of the accused chained her up outside as punishment and let the child die an agonizing death of thirst in the scorching heat," prosecutors said during the trial.

"The accused allowed her husband to do so and did nothing to save the girl."

Wenisch's husband, Taha al-Jumailly, is also facing trial in separate proceedings in Frankfurt, where the verdict is due in late November.

Identified only by her first name Nora, the Yazidi girl's mother has repeatedly testified in both Munich and Frankfurt about the torment allegedly visited on her child.

The defense had claimed the mother's testimony is untrustworthy and said there was no proof that the girl, who was taken to hospital after the incident, actually died.

Wenisch's lawyers had called for her to receive just a two-year suspended sentence for supporting a terrorist organization.

When asked during the trial about her failure to save the girl, Wenisch said she was "afraid" that her husband would "push her or lock her up".

At the close of the trial, according to the daily Sueddeutsche Zeitung, she claimed she was being "made an example of for everything that has happened under IS".

According to other media reports, Wenisch converted to Islam in 2013 and travelled the following year via Turkey and Syria to Iraq where she joined IS.

Recruited in mid-2015 to the group's self-styled hisbah morality police, she patrolled city parks in IS-occupied Fallujah and Mosul.

Armed with an AK-47 assault rifle, a pistol and an explosives vest, her task was to ensure strict IS rules on dress code, public behavior and bans on alcohol and tobacco.

In January 2016, she visited the German embassy in Ankara to apply for new identity papers. When she left the mission, she was arrested and extradited days later to Germany.

Wenisch's trial, which began in April 2019, is one of the first examples of court proceedings over the Islamic State group's brutal treatment of Yazidis.

A Kurdish-speaking group hailing from northern Iraq, the Yazidis were specifically targeted and oppressed by the jihadists beginning in 2015.

Prominent London-based human rights lawyer Amal Clooney, who has been involved in a campaign for IS crimes against the Yazidi to be recognized as a "genocide", was part of the team representing the Yazidi girl's mother.

Germany has charged several German and foreign nationals with war crimes and crimes against humanity carried out abroad, using the legal principle of universal jurisdiction which allows crimes to be prosecuted even if they were committed in a foreign country.

A handful of female suspects are among those who have appeared in the dock.

In November 2020, a German woman named as Nurten J. was charged with crimes against humanity allegedly committed while she was living in Syria as a member of Islamic State.

In October 2020, another German court sentenced the German-Tunisian wife of a rapper-turned-jihadist to three-and-a-half years in prison for having taken part in the enslavement of a Yazidi girl in Syria.