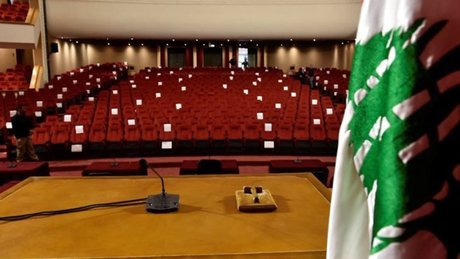 The MPs of the Free Patriotic Movement on Thursday staged a walkout from a legislative session over a dispute related to the current threshold needed to approve laws and bills -- 59 or 65 votes.

Parliament consists of 128 seats but ten are currently vacant due to deaths and resignations.

Speaker Nabih Berri adjourned the session after the walkout due to the loss of quorum.

He considered that the amendment axing the six expat seats received "only 61 votes" and not the needed majority while lamenting other perceived violations.

"What are the reasons behind manipulating the electoral law? Nothing happens if we leave it as it is. The electoral process can happen without problems, so why are we creating problems today. We regret the constitutional dispute which also violates the National Pact," Bassil added.

"The amendment or interpretation of the constitution requires a two-thirds majority in parliament... and changing that is rejected and will constitute an additional article in the challenge that we will file," Bassil went on to say.

Parliament had earlier in the session voted to confirm the March 27 date for parliamentary elections amid the FPM's objection and Hizbullah's abstention. President Michel Aoun had returned the amendments to parliament without signing the bill but today's vote overrules Aoun's rejection.

Seventy-seven MPs voted in favor of the aforementioned date.

Parliament also voted to confirm the amended deadline for the registration of expats despite Foreign Minister Abdallah Bou Habib's declaration that it would be impossible for the lists to be complete within the stipulated deadline.

Bassil also noted that the amended deadlines are unfeasible.

Torture and Live Stream his Execution on social media.

it's not as if the country in sinking and people are starving....

"What are the reasons behind manipulating the electoral law?" sure that is a priority right now... pityful idiots

The only reason Berri wants to advamce the electipns date is to undermine abbas ibrahim's speakership bid. d this is dricing bassil crazy to get berri for 6 more yrs.