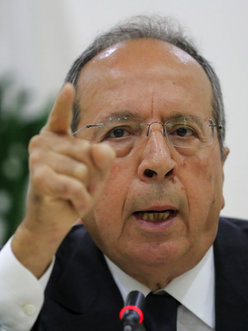 Former security chief and current member of parliament, Jamil al-Sayyed, denied accusations on Friday that he smuggled tens of millions of dollars out of his crisis-hit country.

He challenged his accusers to reveal the name of a government official whom they said helped him transfer the funds.

Al-Sayyed, ally of Hizbullah, was sanctioned Thursday along with two Lebanese businessmen by the U.S. Treasury Department.

The U.S. agency said al-Sayyed sought to skirt informal capital controls imposed by local banks since November 2019, and was aided by a senior government official in transferring over $120 million to overseas investments, presumably to enrich himself and his associates. The statement did not name the government official.

The Treasury Department also said al-Sayyed had contributed to the breakdown of the rule of law in Lebanon, citing his urging of security forces to kill protesters who gathered outside his home.

Speaking during a news conference in Beirut, al-Sayyed denied all the charges, adding that he is ready to go to the United States to be questioned there and defend himself.

"I challenge them to grant me a (U.S.) visa to go. I will go tomorrow and will face them," al-Sayyed said, adding that if the funds were discovered in "any corner of the world ... they can keep me in jail there."

Al-Sayyed said that in June 2020, a group of protesters gathered outside his apartment building, causing a mess and trying to break in. The legislator said his pregnant daughter was at home during the incident, and he told the guards "to open fire" if anyone breaks into the apartment. He added that in any country in the world, a person has the right to defend himself if someone tried to break into his home.

Al-Sayyed was among four pro-Syrian generals jailed without charge for nearly four years over the 2005 assassination of former Prime Minister Rafik Hariri. Al-Sayyed and the three other generals were freed in 2009 for lack of evidence.

The legislator said he visited France this year while he was preparing to file a lawsuit at the United Nations to demand "compensation and apology" over the time he spent in jail. Al-Sayyed said that he wanted to prove that at the time when he was in detention, then U.S. ambassador to Lebanon Jeffrey Feltman was putting pressure on U.N. officials to keep him in jail.

Send him to Guantanamo!

He can try to challenge the ruling--the thing he and others like basil fear is that the details become public. This is why basil hasn't challenged his verdict--he doesn't want his dirty laundry being made public.

The cancer of Lebanon that ruined the military.