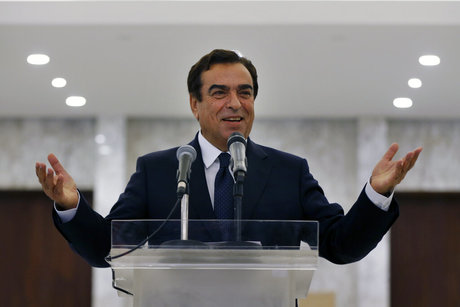 Embattled Information Minister George Kordahi on Saturday visited Maronite Patriarch Beshara al-Rahi in Bkirki and left without making a statement, amid a diplomatic storm sparked by his remarks on Yemen’s war.

Asked upon his arrival whether he intends to resign, Kordahi told reporters that he would wait to “see what the patriarch wants.”

MTV meanwhile reported that the two men “evaluated the resignation decision and what’s better for the country,” noting that al-Rahi might have advised Kordahi to resign.

“Al-Rahi insisted in his meeting with Kordahi on adopting neutrality in Lebanon’s relations with the neighboring countries,” Bkirki sources told MTV.

Marada Movement chief Suleiman Franjieh, who named Kordahi to be a minister in the new government, had also met with al-Rahi earlier in the day. Speaking after the talks, Franjieh revealed that Kordahi had suggested to announce his resignation from Bkirki or Baabda.

“I refused because he did not make any mistake. Still I am with any decision he takes,” Franjieh added.

Kuwait and the United Arab Emirates on Saturday followed the Saudis and Bahrainis with punishable measures against Lebanon, increasing pressure on the small, crisis-hit country badly in need of foreign assistance to help it ease a crippling economic and financial crisis.

On Saturday afternoon, Saudi Ambassador to Lebanon Walid Bukhari flew home after he was recalled by his government, according to airport officials in Beirut. Bukhari's departure came a day after Saudi Arabia ordered Lebanon's ambassador to Riyadh to leave within 48 hours and banned all imports from Lebanon.

On a TV program filmed in August and aired this week, Kordahi had described the war in Yemen as an “aggression” by Saudi Arabia and the United Arab Emirates. He called the war "absurd," saying it must stop because he is opposed to wars between Arabs. The program was recorded around a month before Kordahi became minister.

The creme de la creme of Sleiman Frangieh. As competent as his master. The technician we were paring for. Another despicable traitor, and incompetent failed politician.

“ Kordahi told reporters that he would wait to “see what the patriarch wants. “

This symbolizes everything that is disfunctional is this 10452km2 shithole.

Religion and politics should be dissociated, in fact all religious leaders should be muzzled and locked up if they open their mouths.

What the patriarch will tell him to do ! In any democracy, religious leaders and clerics have nothing to do with politics, let alone dictate to a government official what to do. No wonder why Lebanon is in such a mess, from all points of view.

Oh he is in love with himself and has ambitions to become president. I love the hair dye and the fake smile.

He basically put his feet in his mouth. His idiot boss sees nothing and no mistake in what the idiot stated as in it's ok for the Assad family friends to massacre innocent Syrian citizens whereas it is not an Arab war but rather Israeli funded imperialism against Assad buddy, but for the gulf unlike Iran faqih supporters not an ok Arab war.
The people will have to vote whether it would be a western + gulf enriched new Lebanon or remain Iranian hell state.