Kordahi Says His Resignation is 'Out of the Question' 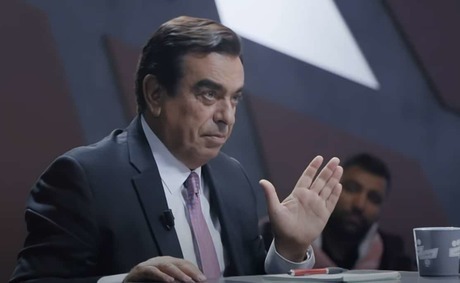 Information Minister George Kordahi on Sunday stressed that he will not resign despite the growing diplomatic crisis with Saudi Arabia and the Gulf countries.

In remarks to al-Jadeed television, Kordahi emphasized that such a move is "out of the question."

The crisis erupted Friday when Saudi Arabia gave Lebanon's ambassador 48 hours to leave the country, recalled its envoy from Beirut and suspended all imports from Lebanon.

The Saudi foreign ministry said the measures were taken after "insulting" remarks made by Kordahi on the Yemen war, but also due to the influence of Lebanon's Iran-backed Hizbullah. The group, it said, controls Lebanese ports and "hijacks" the government's decision-making in Beirut.

The United Arab Emirates, Bahrain and Kuwait were quick to follow suit.

In an interview recorded back in August and aired on Monday, Kordahi slammed the Saudi-led military intervention against Iran-backed Huthi rebels in Yemen. The interview was recorded around a month before he became minister.

Kordahi said the Huthis were "defending themselves... against an external aggression," sparking angry rebukes from Saudi Arabia and its allies and calls in Lebanon for his resignation.

The minister met with Maronite Patriarch Beshara al-Rahi on Saturday and media reports said the patriarch “advised him to resign.”

To the terrorist Huthis he is a national hero. They should grant him the Huthi citizenship.

He should move to Sanaa and animate an “intellectual” Huthi Show for the undeveloped and unenlightened people.

Bassil and Frangieh are screwing all Lebanese, competing who will be HizbIran dog first. This is not about honor and freedom, it is all about who want to be president by force of arms. We have not forgotten that Hariri, Tueni, Kassir, Shateh, Hawi and countless others were murdered by Assad-Hizbollah's mafia assassins. This is treason at the highest level and we'll make sure all these traitors rot in prison.

Only one theme for this election: independence & sovereignty or occupation by Basij. Wish Thawra comes to its senses and develop a comprehensive economic & social plan using Lebanon countless human and natural resources instead of boring talking heads. Lebanon can be the next Singapore, with a plan for 100% renewable and cheap energy, best fiber optic internet, transportation electrification, tunnels & monorails linking all Lebanon, best universities for the digital age and remote offices, the new hub for international firms. We wasted $40 billion on power corruption whereas a new airport and port can be built with $4 billion. Expat retiree returning home can bring $5 billion a year foreign currency... so much potential! But no investment is possible with Hizb arms, inflation and sky high interest that took us to hell.

Even their own stupidity outsmarted them. For decades these regimes mokawame-axis has proliferated due to what they call "zionist" enemies. The modus is very simple, on behalf of the support coming from zionists in khalej to Zionists in Lebanon, they are justified to completely hijack the support which is intended for nation building. Khalej never had the intention to starve the Lebanese, therefore the support continued though the state rhetoric had changed. The same capital was then distributed on behalf of all Lebanese to few individuals such as Fenyanos, Jamil, Bashar, Berri and others of the so-called resistance axis. And they reinvested the part of the money in drugtrafficing to the same Zionist countries, as the largest chunk was sent aboard. It's their moral right to starve the Lebanese, blow the capital as it is to kill half million Syrians. We cannot live with them. Split the country and everyone will have support coming accordingly, some parts will be heaven and others hell.

How many "Zionist" countries are there?

Kordahi's daughter Patricia still works @MBC Academy as Marketing Manager. She does not work for her father's Man of the Year Bashar Assad or the Huthi TV station Al Maseera.

Add to this when his daughter developed cancer, MBC sent her to the Mayo Clinic in the United States for months at its own expense.

can someone tell me what is the use of this ministry apart from stealing people's money to finance it? is it a priority to solve the economic crisis?

tfeh on the incompetence of those politician crooks....!

HANG cordahi NOW!! it would be a good example to set and the beginning of better days for Lebanon

When this Iranian owned government was formed it was given the name :"Together for Rescue". It's real name should have been "Together for Hell".