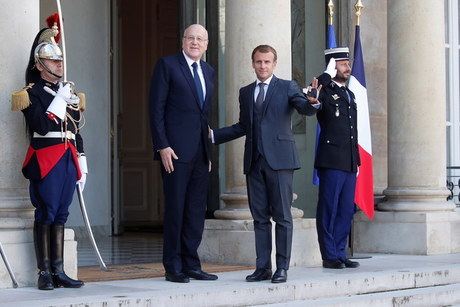 Informed sources told al-Joumhouria that the two leaders will meet in Glascow at the U.N. climate summit.

Miqati will also meet with the foreign ministers of Turkey, Kuwait and Egypt, the sources said.

They added that a meeting is being arranged between the prime minister and U.S. Secretary of State Antony Blinken. Blinken is also attending with U.S. President Joe Biden the climate summit.

A meeting between Saudi Foreign Minister Prince Faisal bin Farhan and Miqati might be “difficult,” the sources said, since Miqati “doesn’t have what meets the Saudi conditions.”

On another note, al-Joumhouria wrote that Miqati is insisting on the resignation of Minister of Information George Kordahi, as “a key to resolve” the Lebanon-Gulf crisis.

Miqati said in a statement Monday that he had asked Kordahi to let his “sense of patriotism prevail over anything else,” media reports said.

"We are facing a big slide,” Miqati reportedly said, "and if we do not avoid it, we will fall into what none of us wants."

The statement comes after Kordahi said Sunday, in remarks to al-Jadeed television, that his resignation is "out of the question."

On another note, al-Joumhouria wrote that Miqati is insisting on the resignation of Minister of Information George Kordahi, as “a key to resolve” the Lebanon-Gulf crisis.

Dream on Miqati! Your handlers in Hezbollah will never allow it. Better you resign.

This clown is counting on Macron to apply pressure on KSA to reverse its decision. Look inward and your actions confirm KSA reservations about Lebanon and Hezbollah's dominance of every aspect of governance. You cannot even fire a minister simply because Hezbollah does not want to. Your government is paralyzed because Hezbollah has demands. You are simply a nobody.

Mbala, he is somebody, Miqati is known in the north as ashraf 7arami …. And that’s quite something!

Mikati doesn't have the balls to sack Cordahi. Shows who is truly in charge of running the country.

wow its okay to KSA, US, Israel and European influence