The Era of Anti-Covid Pills Begins 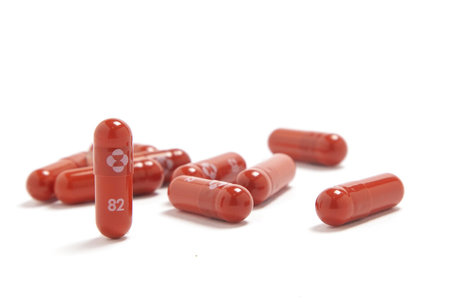 What if a simple pill could help heal from Covid-19?

U.S. pharma giants Merck and Pfizer have announced encouraging results for oral drugs, while an anti-depressant has also shown promise in what could open up a new chapter in the fight against the pandemic.

- What are these treatments ? -

They are pills taken orally as soon as the first symptoms of Covid-19 appear, to avoid serious forms of the illness, and therefore hospitalization.

This form of treatment has been sought since the start of the global health crisis.

After months of research, Merck and Pfizer say they have reached that elusive goal.

Early October, Merck said it was seeking authorization in the United States for its pill molnupiravir, and Pfizer followed suit on Friday with paxlovid.

They are both anti-virals that act by reducing the virus's ability to replicate, slowing down the disease.

Both companies say clinical trials showed a strong reduction in the risk of hospitalization.

Those who took molnupiravir saw that risk diminish by 50 percent and those who took paxlovid by nearly 90 percent, although direct comparisons of these efficacy rates should be avoided because of the different study protocols.

An anti-depressant which is already available to the public, fluvoxamine, has also shown encouraging results in preventing serious forms of Covid-19, according to a study published in October by Brazilian researchers in the Lancet Global Health journal.

- Why are they important? -

If the efficacy of these drugs is confirmed, it will be a major step forward in the fight against Covid-19.

They would add to vaccines to bolster the world's therapeutic arsenal against the virus.

Treatments already exist, mostly in the form of synthetic antibodies.

But these drugs, which usually target those who already have severe forms of the disease, are injected and therefore more difficult to administer.

A pill can be quickly prescribed to a patient who will then take it easily at home.

Merck and Pfizer's treatments, which so far have not shown many side effects, would entail taking around 10 doses over five days.

"The success of these antivirals potentially marks a new era in our ability to prevent the severe consequences of SARS-CoV2 infection," British virologist Stephen Griffin told the Science Media Center.

It is difficult so far to properly evaluate Merck and Pfizer's treatments given both groups have only published statements and have not made the data of their clinical trials available.

French infectious diseases specialist Karine Lacombe warned in September that these types of announcements should be treated with "caution" until the studies can be scrutinized.

She pointed out that these treatments represent a "potentially enormous" market for pharmaceutical groups.

Nevertheless, some elements indicate that Merck and Pfizer are not making empty promises.

For one, they both stopped their clinical trials earlier than expected as the results were so strong, with the okay of independent monitoring committees.

Where fluvoxamine is concerned, the data is available but is not without criticism.

Several researchers have complained that the authors did not just limit themselves to evaluating the frequency of hospitalizations, but also assessed the frequency of prolonged emergency room stays.

This, they say, complicated the interpretation of data.

Merck's molnupiravir has already been approved in the United Kingdom where health authorities on Thursday gave their green light to its use in patients at risk of developing a serious form of the illness, such as the elderly, obese people, or those suffering from diabetes.

US and EU health authorities are also urgently reviewing the drug.

The European Medicines Agency promised on Thursday to "accelerate" proceedings, without giving a firm date.

Several countries have already ordered stocks of molnupiravir, such as the United States, with 1.7 million courses of the drug.

The U.S. order gives an idea of the steep price of the drug.

As for Pfizer, while it has not outlined a price for paxlovid, it has promised it will be "affordable" and subject to a tiered pricing approach based on the income level of countries.