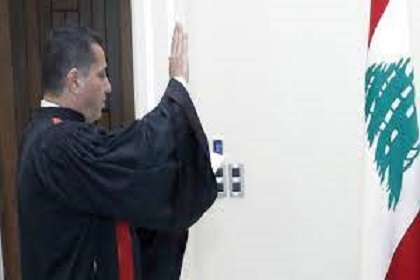 Court of Appeals judge Habib Mezher was notified Tuesday of his recusal in the case against Beirut port blast investigator Judge Tarek Bitar.

Al-Jadeed TV said Court of Appeals chief Judge Habib Rizkallah summoned Mezher to notify him of the decision, telling him that he “exceeded his jurisdiction.”

Another judge will now decide whether Mezher will be permanently removed from the case against Bitar.

A heated exchange had earlier erupted in Mezher’s office in Rizkallah’s presence after he refused to be notified of the recusal, MTV reported.

Mezher had sparked controversy after he started looking into the case against Bitar, with the Court of Appeals announcing that he had been “exclusively” tasked with handling a recusal lawsuit against Court of Appeals judge Nassib Elia.

Bitar's probe into the port case was suspended on Thursday after Mezher notified him of a lawsuit filed against him by ex-minister Youssef Fenianos. Mezher also asked Bitar to hand over the details of the case to enable the court to review the lawsuit.

The Beirut-based rights group Legal Agenda warned that Mezher's request to see the full content of the investigation violates the secrecy of the probe. The group also said that Mezher's known opinions critical of Bitar may constitute bias.

According to media reports, Mezher is close to Hizbullah and the Amal Movement, which both have called for Bitar's removal and launched a fierce campaign against him over alleged selectivity in his summonings.

A Higher Judicial Council meeting had witnessed a “sharp rift” between judges on Monday over Mezher’s move. According to al-Jadeed, many judges defended Mezher by saying that he did not err by deciding to merge the recusal file against Bitar with the recusal file against Elia. They argued that he had been officially tasked to be in charge of Chamber 12 of the Civil Court of Appeals.

“Some judges consider that Mezher’s request that Bitar provide him with the complete file of the port probe to be legal, so that he can look into the case, seeing as there is no confidentiality among judges,” al-Jadeed said.

The recusal request that Mezher was notified of on Tuesday had been filed by the lawyer Rami Ollaiq of the Muttahidoun activist group along with Ziad Risha.

The sectarianism within the judiciary is sickening. It’s pretty hopeless!