Will Tensions Spike in Iraq after Drone 'Message' to PM? 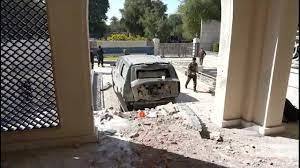 The attack came after pro-Iran factions and their supporters had denounced the election results, which saw the Fatah (Conquest) Alliance -- political arm of the predominantly Shiite paramilitary Hashed al-Shaabi -- shed a large number of seats in parliament.

The attempt early Sunday also followed days of violence as hundreds of Hashed supporters protested outside -- then attempted to storm -- the heavily fortified Green Zone that houses the premier's residence, the government and diplomatic missions.

The prime minister escaped unharmed after an explosive-laden drone hit his residence, although two bodyguards were reportedly wounded.

Analysts interviewed by AFP were unanimous that the attack was closely linked to the elections and the negotiations to follow on forging parliamentary alliances ahead of selecting a new government.

Renad Mansour, a senior research fellow at the UK-based Chatham House, said pro-Iran groups, such as the Hashed, use "coercive power" to "maintain their standing, notwithstanding whether they won or lost the election".

These groups refuse to be excluded from any backstage negotiations on the formation of the next government, he said.

On the eve of the attack on Kadhemi's house, firebrand Shiite cleric Moqtada al-Sadr, whose movement gained the largest number of seats in the polls, met several Sunni and Shiite officials -- notably excluding any Fatah Alliance members.

According to Lahib Higel, a senior Iraq analyst at the Belgium-based International Crisis Group, the pro-Iran factions have "sought different tactics to put pressure on government formation negotiations."

These have included "claiming the election results are fraud, using street pressure and as we saw two days ago the attempted breach of the Green Zone," she said.

Hundreds of supporters of the Fatah Alliance set up camp on Saturday outside the Green Zone, hours before the assassination bid, which has gone unclaimed.

On Friday evening, following clashes during the pro-Iran demonstrations, Qais al-Khazali, head of the Asaib Ahl al-Haq force -- a key component of the Hashed -- "threatened" Kadhemi, according to Hamdi Malik, an associate fellow at the Washington Institute.

He has tweeted a video of Khazali seen addressing Kadhemi and vowing the premier would be put on trial for the "blood of the martyrs" -- referring to two protesters reportedly killed in the clashes.

Khazali was among those who condemned the attack.

Malik said that although Kadhemi's home had been targeted by drones in the past as a "message", the latest attempt in which the residence was struck went a step further.

According to Mansour of Chatham House, drone attacks in Iraq have become a "common strategy of warning."

Such attacks have often targeted U.S. interests in Baghdad or the Kurdish capital Arbil in northern Iraq.

They remain largely unclaimed but have been blamed on groups loyal to Iran and seeking the expulsion of U.S. forces from Iraq.

In recent years, anger has mounted towards the Hashed, particularly among youth who accuse it of being more loyal to Iranian interests than those of Iraqis.

Pro-Iran factions have also been blamed for the targeting and killing of demonstrators in near-nationwide protests that began in October 2019.

Iraq's electoral commission said Monday that a manual vote recount in some polling stations where complaints were filed by pro-Iran groups did not show any "fraud" -- an announcement likely to further anger these groups.

But Lahib Higel predicted that "we might have reached the ceiling of escalation for now", expecting a move towards "dialogue".

The attempt on Kadhimi's life has been widely condemned across the domestic political arena and among world governments, including rivals Washington and Tehran which have long vied for influence over Iraq.

The U.N. Security Council on Monday called for "perpetrators, organizers, financiers and sponsors of these reprehensible acts of terrorism" to be brought to justice.

Higel said the pro-Iran groups were "losing the media war" and "not coherent in their messaging".

Rather than risk losing more face, they would more likely push for positions in the government, she said.

In Mansour's view, "no side, and especially the Sadrists, has the appetite for an extended period of violence that could lead to an internal Shia civil war."