Not a Game Show: Kordahi at Center of Lebanon-Saudi Row 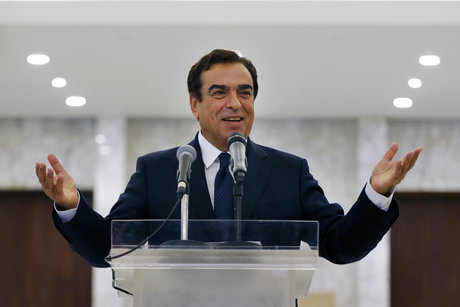 George Kordahi was popular among TV viewers in the Middle East for his dapper charm. He schmoozed with beautiful women, dropped jokes and recited lines of Arabic poetry — all the while weighing in with his political opinions about the region's events.

Now the former host of the game show "Who Wants to Be a Millionaire" is Lebanon's information minister, and those opinions have landed Kordahi at the center of his country's worst-ever crisis with Saudi Arabia.

Kordahi refuses to resign or apologize to the Saudis, whose financial backing Lebanon desperately needs. Instead, the former entertainer known for his smooth style is relying on the backing of Saudi Arabia's nemesis, Lebanon's powerful Iran-backed Hizbullah.

Kordahi became a politician only late in life, joining the Lebanese Cabinet in September at the age of 71. But he had plenty to say about politics in his years as an entertainer.

Appearing on a Lebanese talk show called Talk of the Town in 2017, he handed a red rose to each of the four women sharing the stage with him. The female host gushed that viewers can see for themselves how gallant he is.

Seated between the three daughters of Lebanon's president, Kordahi said it was his luck and privilege to be among such "glorious women."

Yet alongside the compliments, he expressed hardline views on limiting free expression. Commenting on domestic affairs, he said an information minister should regulate social media, rein in what he said were smear campaigns and act as a censor instead of the security agencies.

The current diplomatic crisis goes back to comments he made Aug. 5, a month before he became information minister. In the remarks, which were recorded and aired later, he defended Yemen's Iran-backed Houthi rebels. This angered Saudi Arabia, which has been leading a military coalition fighting the Houthis in a brutal and deadlocked war in Yemen.

Saudi Arabia and other Gulf countries have withdrawn their ambassadors from Lebanon in protest over the comments. The diplomatic spat is putting hundreds of millions of dollars in trade and assistance from the oil-rich nations at risk at a time of dire need for Lebanon.

As host of the "millionaire" show launched in 2000, Kordahi appealed to audiences from Morocco to Oman with his guttural voice and use of the Arabic language in a way that transcended local dialects.

He peppered his show with references to poetry, literature and the Quran — a sure way to the hearts of many young Muslims, especially coming from Kordahi, who is Christian.

At the time, the second Palestinian uprising dominated the news. Kordahi's show took on the Palestinian cause, an issue that united Arabs. In one episode, the contestants were the mothers of three Palestinians killed in the violence. They ended up winning $100,000.

In 2011, the anti-government protests of the Arab Spring spread across the region.

Kordahi chose to side with Syria's Bashar Assad and its Lebanese ally, Hizbullah, losing many fans and financial supporters in the process.

During a lecture in Damascus in 2011, Kordahi said the protests against Assad were "a foreign conspiracy" and praised the long-time ruler as a real reformer. At the time, Saudi Arabia and other Gulf nations were backing Assad's armed opposition.

The Saudi-owned MBC channel dismissed Kordahi as he was preparing a new show, posting on its website that it was out of respect for the Syrian people. Kordahi left the network for posts in Lebanese media, including a stint in one allied with Hizbullah.

Kordahi, who also has a perfume and clothing line in his name, began toying with a career in politics. In 2013, he was named for parliament on a list allied with Michel Aoun, the current Lebanese president and at the time the head of the largest Christian party. The elections never took place.

That year, Hizbullah sent troops to Syria to back Assad's embattled forces in the border province of Homs. In an interview on Syrian TV, Kordahi praised Hizbullah leader Sayyed Hassan Nasrallah, saying "I see myself in him."

When he finally entered Lebanese politics, Marada, a Christian party allied with Syria and Hizbullah, named him to the post of information minister.

In his first comment as minister, he appealed to the Lebanese media to refrain from hosting analysts who warn of doomsday scenarios in Lebanon. Many perceived it as a call for censorship.

Attempts to reach Kordahi were unsuccessful.

When the crisis with Saudi Arabia erupted, he first tweeted that his comments intended no offense. Then he held a press conference. "Lebanon should not remain subject to extortion from anyone, any country or any ambassadors," he said.

To his backers, Kordahi is a symbol of national dignity, freedom of expression and resistance to Gulf interference in Lebanese affairs.

Posters of Kordahi have appeared in Houthi-controlled areas of Yemen and in the Iraqi capital of Baghdad, with the words: "Yes George, the war in Yemen is absurd."

Hassan Fadlallah, a Hizbullah lawmaker, said Kordahi did nothing wrong. "Some people with no dignity and no national honor are exaggerating, saying this will ruin the country."

To his critics, his comments and refusal to resign are reckless. "The public is paying the price of people who named themselves officials and show no responsibility," tweeted Lebanese singer Elissa.

Public figures from the Gulf called Kordahi ungrateful and even called for firing his daughter, who works at MBC.

Saudi officials said the problem is bigger than Kordahi's comments — rooted in a system that has allied itself with Iran. Mediators suggested his resignation is a first step toward reconciliation.

Salem Zahran, a political analyst, said Kordahi inadvertently stumbled into a fight not of his making. He suggested the Saudis were lashing out because they are frustrated over the stalled war in Yemen, particularly as Houthi rebels advance in the strategic province of Marib.

"It is not his fault. Destiny put him in this reality," Zahran said. "Every Lebanese is born a politician until proven otherwise."

In an interview on Syrian TV, Kordahi praised Hizbullah leader Sayyed Hassan Nasrallah, saying "I see myself in him."

All Shias and Christian Aounis see themselves in Sayyed Hassan.

Hilarious, I see myself in him. LoL quoi!

Seated between the three daughters of Lebanon's president, Kordahi said it was his luck and privilege to be among such "glorious women."

This Qord-ahi thinks he is God's gift to women. An Ugly self-centered pos!

lol ! What is glorious about these witches? Their beauty? Their height? Their achievements? What a brown nose he is:)