Cyprus to Probe How Migrant Boat from Lebanon Slipped Away 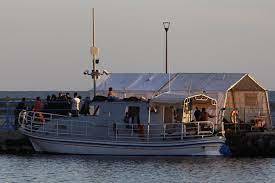 Cyprus police have suspended one officer and 11 constables after launching an investigation into how a boat loaded with migrants gave them the slip and continued its journey to Italy after docking at a local harbor.

Police said in a statement Friday that the boat carrying 61 people was intercepted early Wednesday off the Mediterranean island's southern coast and escorted to port in the resort town of Paphos.

The boat had initially set sail from Tripoli, Lebanon, and was headed to Italy, but had to stop in Cyprus due to choppy seas.

Police said the migrants expressed a wish to continue their trip to Italy and that none had applied for asylum in Cyprus.

But the boat resumed its journey westward on Thursday evening without apparently anyone noticing. Once the alarm was raised, police patrol boats gave chase and caught up with the boat, but its occupants rejected police overtures to turn back.

Police said they continued to escort the boat until it reached 52 nautical miles (60 miles, 96 km) from Cyprus' coastline.

Police said two separate reports into the incident indicated that there were grounds for a disciplinary investigation against the dozen members of the police.