Bassil: It's Necessary to Differentiate between Stances of Lebanon, Hizbullah 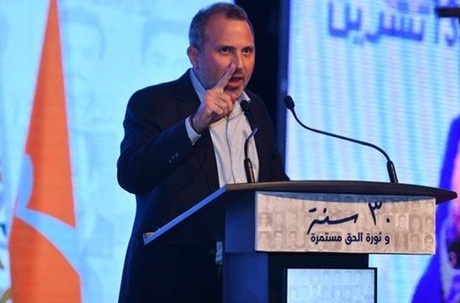 Free Patriotic Movement chief Jebran Bassil has called for “differentiating” between the stances of the Lebanese state and Hizbullah, noting that he had “repeatedly” expressed his “opposition to Hizbullah’s stances” during his tenure as foreign minister.

“Holding us the Lebanese responsible for stance of a Lebanese party aggravates the problem… and failing to differentiate between Hizbullah and the FPM is another problem,” Bassil added, in an interview with Kuwait’s al-Qabas newspaper.

“The issue carries injustice and targeting against us. Yes, we have an understanding with Hizbullah, but we do not agree on all things. Hizbullah Secretary-General Sayyed Hassan Nasrallah repeatedly said that he (his party) went to Syria and other places without taking anyone’s approval, and this is a point of contention with him,” Bassil said.

He added: “We agree with Hizbullah in its war against the Israeli enemy and terrorism, and we disagree over other topics that do not serve Lebanon’s interest. I frankly say that I do not know the magnitude of Hizbullah’s intervention in Yemen, and I believe that Iran can act in Yemen without needing Hizbullah.”

noting that he had “repeatedly” expressed his “opposition to Hizbullah’s stances” during his tenure as foreign minister.

OMG! The lies, the deceit and the backtracking are beyond description. When he was Foreign minister he acted as a mouthpiece for Hezbollah going from country to country justifying Hezbollah's actions.

Gebran Bassil and his sectarian fascist racist party are in a freefall and not a parachute in sight. Hezballah is losing it's Christian cover and that is terrifying them, they have nothing to hide behind anymore.

Thus spoke Zarathustra... Nothing change the obvious fact that Bassil is a Useful Idiot with assigned role to attack Christians, Sunnis, and anyone believing in free and democratic Lebanon. A HisbIran dog in leash. A shameless political prostitute, an evil mind and a premeditated assassin of our independence. He and his deranged uncle sold Lebanon to the Basij for 30 pieces of silver for personal benefit. This Don Quixote will soon be facing reality of his evilness and crime. He can run but will not escape justice.

How can you differentiate between Hizbos and Lebanese state, when the Hizbos control the entire Lebanese state institutions and Hassan Nasrallah is the defacto head of state/

I used to be against abortion then I saw Jebran Bassil. Now I am pro, even late term. Very late term, 51 years late.

So magnanimous--did he forget the stances he took while he was foreign minster---he sort of pissed off all the arab states. Maybe he should look back on that AGAIN.